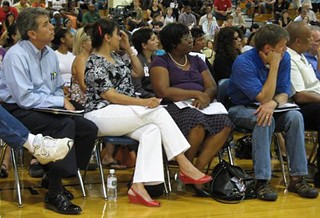 Confirming what we reported on Tuesday, AISD has announced the details of how they plan to proceed with the Pearce Middle School repurposing.

Superintendent Meria Carstarphen will present the repurposing proposal at a special meeting of the Board of Trustees, starting at 7.45pm, Aug. 3 in the Board Auditorium, 1111 W. Sixth.

AISD is working to have the plan up on their website before the weekend, so stakeholders can look it over. On the night of the meeting, citizen communication will start at 8.20pm: Sign-up to speak will run 7.45am-4.45pm at the Superintendent's office, then 4.45-7.45pm in the Board Auditorium. Comments can also be left at the Pearce website or at 512/414-9101.

If the board approves the plan on Monday, it will be sent straight to Commissioner of Education Robert Scott. If he approves it in time, that means Pearce will re-open, in some shape, form or manner, for the new school year.

There are two big questions pending about this proposal. One, what will be in the instructional plan: Two, who will actually be running the place?

Superintendent Dr. Meria Carstarphen will present the Repurposing Proposal for Pearce Middle School to the Austin School District Board of Trustees at a Special Meeting on Monday, August 3, followed by a Public Hearing, and action by the Board.

The Special Meeting will begin at 7:45 p.m. in the Auditorium of the Carruth Administration Center, located at 1111 West Sixth Street. Following a brief presentation by Dr. Carstarphen, public testimony on the Repurposing Proposal is scheduled to begin at approximately 8:20 p.m.

If the Board approves the proposal at Monday’s meeting, it will be delivered Tuesday morning to Texas Education Commissioner Robert Scott, who will make the final determination on whether the Pearce campus will be open for the next school year. If approved, classes are scheduled begin on Monday, August 24.

Citizens may sign-up to speak on the Pearce proposal, beginning at 7:45 a.m. on August 3 in the Superintendent’s Office, Room A-230 of Carruth. Citizen sign-up will continue at 4:45 p.m. at the Auditorium, and remain available until 7:45 p.m., when the Special Meeting starts.

Spanish language interpretation will be available for those attending the meeting, which will also be carried live over AISD-TV (Channel 22), and streamed on the AISD Website, http://www.austinisd.org

AISD will post the Repurposing Proposal on the AISD Website later this week. Copies of the proposal, in both English and Spanish, will also be available at the Public Hearing on August 3.

Members of the community who wish to comment on the Pearce Repurposing Proposal may also do so on the AISD Website. The address is http://www.austinisd.org/schools/pearce/comments.phtml The public may also leave a recorded telephone message at 414-9101.

Beginning at 6 p.m. on Monday, August 3, and continuing until 7:30 p.m., the Board of Trustees and Superintendent Carstarphen will hold a Work Session on the District’s Recommended 2009-2010 Budget. The Work Session will also be carried live on AISD-TV and streamed over the AISD Website.