Cornyn: No on Sotomayor

Sen. Cornyn: Voting no, to no avail

When it came to Judge Sonia Sotomayor, all Sen. John Cornyn promised was that he would oppose a filibuster of her nomination. Now he's confirmed what was broadly suspected: That he'll vote against her nomination.

In his lengthy press release/explanation, the Texas Republican admits that he's taking this action "with the certain knowledge that she will be confirmed despite my vote" and goes on to "congratulate her on her historic achievement."

In fact, he goes on to say he "found much to admire about Judge Sotomayor's record" and called her an "experienced judge with an excellent academic background [with] the temperament we expect from members of our highest court."

So what's the problem?

He steers clear of the "wise Latina" nonsense and instead said that "several of her decisions demonstrated the kind of liberal judicial activism that has steered the court in the wrong direction over the last few years."

So Cornyn's issue isn't that she'll make the Supreme Court more liberal (since Sotomayor is on track to replace Justice David Souter, this is one supposed liberal out, one arguable liberal in), but that her nomination won't push it back towards the right. 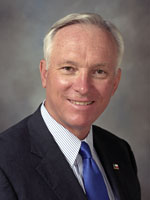