Pearce: Fill in the Blanks 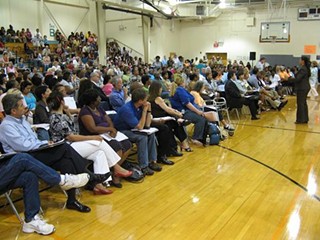 Superintendent Meria Carstarphen (r) listened to them: Now she wants to hear from you (Photo by Richard Whittaker)

Citizens attending the public meeting at Pearce Middle School on Wednesday got to have their input on the school's threatened future. Now Austin ISD is asking for everyone else in the community to get involved.

The district wants people to vote on which direction it should take in its negotiations with the Texas Education Agency (the ballot can be found online here in English or en español). There are five straight-forward options on the table:

Option 1: Submit Refinement and Realignment (RAR) Plan as proposal to repurpose Pearce for 2009-2010.

Option 2: Submit a repurposing proposal for 2009-2010 based on discussions between the Superintendent and Commissioner.

Option 4: Request a records review related to the closure of Pearce.

Option 5: Pursue other ideas generated by the community.

The pros and cons of each are explained on the website, and the poll will be online through the weekend. Quite literally, the future of the Pearce campus lies in public responses.