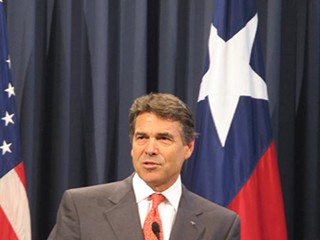 So the word has spread quickly: Gov. Rick Perry confirmed this afternoon before a meeting with business groups that there will be a special session. He's just not saying when, why, or on what issues. Ah, well, at least we know where it will be.

This time last week, Perry was playing down the pressing need for a special, forced by the failure to pass all the necessary Sunset bills. Now the speculation can only mount as to when, and how narrowly charged, the session will be. Not even state lawmakers know that yet: Speaking briefly to Rep. Donna Howard, D-Austin, she ran into Perry at this morning's Texas Game Warden Academy graduation ceremony. All he would say was that he would only have them back "for a short time."

The timing is a big question: Perry won't want the lege back before June 22, otherwise they can start over-riding his veto. Then Lt. Gov. David Dewhurst is getting married in July. Theoretically, Perry has until the Sunset wrap-up date of Sept. 1, 2010, to pull the trigger, but there's the question of how much this all gets caught up in primary season.

But the real question may be, why exactly were Senate Republicans pushing so hard for a special session?

Why put this at the Senate's door? Because the morning after sine die, while Speaker Joe Straus was playing the post-session game with the press corps, the Senate issued a press release entitled "Regular Session Ends, But Special Session Looms." Which was a bit ominous, really.

But the Senate wasn't a bunch of passive observers: In fact, it's arguable they orchestrated the need for lawmakers to return.

The upper chamber made a special more likely/inevitable by refusing to even take up HCR 291, the Sunset safety net bill safety net resolution crafted by the House (with some input from Perry's office.) At the time, that left Democrats like Sen. Judith Zaffirini, D-Laredo, scratching their heads and asking why sine die was called with hours left for debate.

Perry has referred to the Senate getting bad advice that he could just extend the Sunset-threatened agencies by decree, but that wasn't the only reason they want to use their downtown parking again. Sen. Steve Ogden, R-Bryan, made it pretty clear at sine die that he wants to come back to authorize the $2 billion in TxDoT bonds he blames the House for ignoring. Similarly, Sen. Tommy Williams, R-the Woodlands, said, "It's up to the governor to call us in to a short special session" to fix both bonds and Sunset.