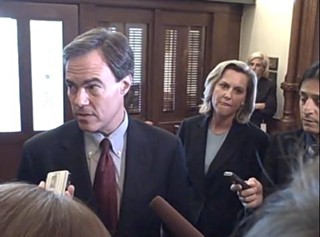 Speaker Straus with Press Secretary Angela Hale: "Humbled and honored to have received this overwhelming support" (Photo by Richard Whittaker)

It may still be a year and a half away, but Texas House Speaker Joe Straus is parlaying his strong report card from the 81st Legislature into his run to lead the 82nd as well.

Yesterday evening, Straus' press secretary Angela Hale put out a press release announcing 98 members had signed pledge cards backing his candidacy: By 9pm, she was able to add another 8 names. That brings him to a comfortable 106 supporters, crossing party lines and including noted liberals and conservatives (see the full list after the jump.)

But before anyone counts this as a done deal, here are a handful of important considerations to take into account.

One, a name missing off the list basically means nothing at this stage: A whole bunch of reps are either still asleep, on vacation, or just hiding after the session.

Two, pledge cards are not written in stone, and Straus is the only person that he has announced he will run again, making this a one-horse race so far (that said, it just got harder for other riders to make it to the starting gate.)

Three, and most importantly, this is the current House talking about what the next House will do.

There are primaries and a general election to go yet, and the makeup of the entire chamber could change. True, the rumor for much of the session has been that, even if the House goes to a 75-75 split, or if the Republicans re-enforce their majority, Straus will keep the big seat. But, as one ranking Democrat confided, if the Democrats take back the House, they're taking back the House – Speaker's gavel and all.

AUSTIN – Just days after the end of the 81st Texas Legislative Session, Texas House Speaker Joe Straus announced he has support from the vast majority of House Members for his re-election as Speaker for a second term. "As of this morning we have received 98 signed pledge cards from colleagues reaffirming their commitment to re-elect me as their Speaker. I am humbled and honored to have received this overwhelming support. This is a clear indication that members of both parties can set aside their differences to work together to find solutions to critical issues facing our state. I look forward to building on this foundation and working with all of the members during the legislative interim."

And here's the addendum from Angela Hale: