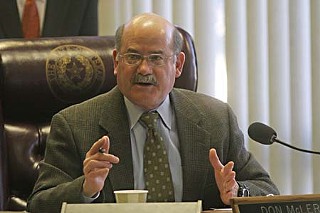 The debate over whether to confirm the re-appointment of College Station dentist Don McLeroy as chairman of the State Board of Education is scheduled to happen in the Senate today. Considering McLeroy has stirred up a lot of controversy and opposition because of his fervent belief in (and promotion of) creationism, the words of the pastor of the day (sorry, didn't catch his name) carried some interesting connotations. In the invocation, he declared humans were "made from love, not logic," and we were "created for a purpose, not by mistake or accident."

The overwhelming majority of the governor's appointments are just rubberstamped by the Senate, but it is uncertain whether McLeroy has the two-thirds support of the body needed for confirmation. Democratic Senators Eliot Shapleigh of El Paso and Kirk Watson of Austin have led the charge against him.

Stay tuned here for blog posts or check out our Twitter coverage.