Merritt Versus the Caucus 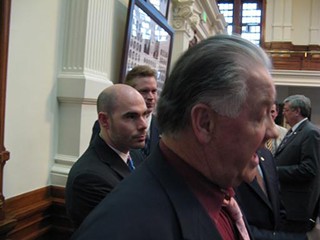 Rep. Bonnen, over the shoulder of Rep. Merritt: Apparently Bonnen's in the media now. Don't see a press badge (Photo by Richard Whittaker)

In the war of slow, lengthy words in the Texas House of Representatives, last night the Republicans tried to prove they were more unified than the Dems by trying to yell down one of their own – in front of the media.

Around 5.15pm Saturday, both party caucuses broke off for meetings – seemingly to end the "chubbing" delay-tactic Democrats are using to keep voter ID off the floor.

It was already a strange moment when KVUE's Elise Hu recognized Anthony Holm, the spokesman for GOP sugar-daddy Bob Perry, emerging from the GOP caucus meeting in the Speaker's Committee Room. They finished before the Dems, so Republican Caucus Leader Larry Taylor, R-League City, got the first draft of history in. Leaders from both parties had met, he said, "and we made an offer" to get the Democrats out of their impasse, contingent on GOP approval. The proposal was to move significant bills like Texas Department of Insurance Sunset and Voter ID to Tuesday, and move on with the calendar at normal speed. "(I) brought it back to my caucus, and they, they want to press on."

That was also how Public Safety Committee Chair Tommy Merritt, R-Longview, remembered it. When Taylor finished, Merritt stepped forward to provide his view of the events. One difference: The GOP caucus, he said, was not totally unified, contrary to Taylor's opinion. Then the weirdness started, courtesy of Rep. Dennis Bonnen, R-Angleton, who started interrupting Merritt and asking him questions.

Merritt's take was simple. "This caucus has every ability to bring up voter ID, photo ID. I attempted to do that last night. I would be willing to make the motion today to bring that issue up," said Merritt. "I believe there would be a consensus on photo ID if we could bring it up," he added, and both caucuses could "come together and decide which bills are important, and move forward."

"Mr. Merritt, do you support a hard photo ID?" asked Bonnen (who isn't exactly known for his charming ways and winning personality.)

"Are you a reporter?" Merritt retorted.

"Yeah, I'm reporting for the Republican caucus," said Bonnen, who was quickly joined by other GOPers including "Doc" Anderson and Charlie Howard (armed with a flip-cam. Where did that footage end up?) in trying to belittle Merritt in front of the press.

Undeterred, Merritt added, "Chairman Larry Taylor reported to us that he offered a deal to the Democrats, and the caucus turned him down."

That wasn't what happened, said the Bonnen crowd, who tried to claim that Merritt didn't speak for the caucus (he had actually repeatedly said he didn't), that he was a minority of one, and had missed the whole meeting. Except that's exactly what Taylor said happened. To quote Taylor again, "We made an offer of something they might consider doing, contingent upon my caucus approving it. Brought it back to my caucus and they, they want to press on, follow the rules of the House."

Bonnen, as Merritt pointed out, doesn't really have much of a leg to stand on. He voted against the voter ID proposals in Senate Bill 362 in committee, but only after taking a pass in the voting and coming back after Democrat Rep. Joe Heflin had voted for it, ensuring its passage. If the bill does ever hit the floor and it's not the hard photo ID language conservatives crave, Merritt said, "He gets a free walk of saying, 'I voted against that.'"

When asked how he would characterize members of his own caucus interrupting his meeting with the press, Merritt said, "I think that's their style of trying to suppress other opinions within the Republican caucus. To me, I believe everyone should have a say-so and a listening, and I think it's very rude of individuals to stand here and question what I feel in my heart and what I feel about the legislative process."