Absolutely Nothing is Happening in the Senate

Senators scramble to save their bills from the House's chubbing 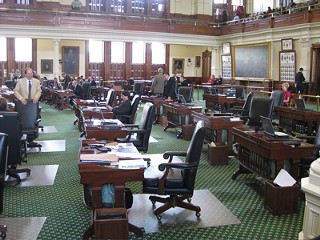 Where did everybody go? (photo by Lee Nichols)

Actually, that’s no longer true. The senators just returned from about two hours of breaktime, during which they were working to save their session.

Since the Democrats are chubbing in the House in hopes of killing off the voter ID bill (SB 362), the senators fear many of their bills in the lower house are in danger of never making it to the floor. So the Senate went into recess, Sen. Leticia Van De Putte told reporters, to figure out which of their bills won’t survive and to hopefully attach the language from those onto other bills that might still have a chance.

Of course, all this is the senators’ own fault – the Republican ones, anyway. If the R’s hadn’t tossed out the two-thirds rule in order to pass voter ID back at the beginning of the session, they wouldn’t have endangered their arguably more important bills now.

And as I write this, here comes Senators Florence Shapiro, R-Plano, and Royce West, D-Dallas, marching out from the back and chanting in unison, “work, work, work!”