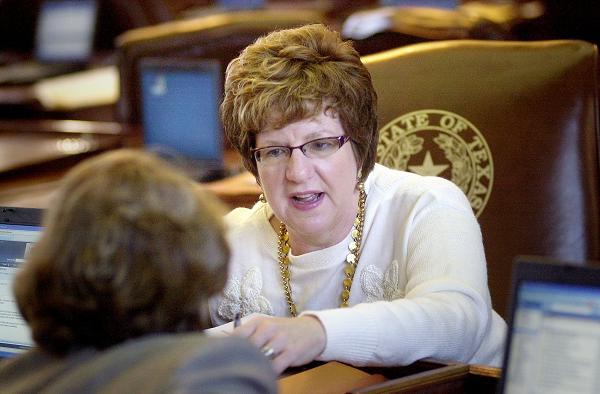 It takes a brave politician to tackle taxes or property rights in Texas: Being on the County Affairs and Land & Resource Management committees, Rep. Valinda Bolton deals with both. Considering that her South-West Travis County district is amongst the fastest-growing parts of the nation, it would be hard for her to avoid: But before the session she said those were her target committees. Has being on there paid off? “It has helped,” she said. Not that she's relying on her own committee clout. She's already managed to get a couple of water usage bills through Natural Resources. Following in the footsteps of Ladybird Johnson, she and Sen. Kirk Watson have been working on scenic billboard reforms for SH 71: His version, SB 1266, is now with the House. "Hopefully we can move that out of Transportation and, hopefully, on to local and consent," she said. But Monday saw the limits of the system. One of her big priorities has been HJR 112 and its accompanying enabling legislation, HB 3477. Even though they were designed to create extra funds for emergency service districts ("which provide one of government's core functions") opponents were distributing talking points to crush them.

So why the opposition? Knee-jerk anti-tax sentiment. “The caption on the bill actually has ad valorem in it,” she explained.

At the moment, ESDs are barred from holding the kind of bond elections that just about any other kind of district can hold, so they struggle to invest in infrastructure. As populations grow in unincorporated areas (like much of her district) and traffic increases, response times suffer. While the proposal had majority support, being a resolution it needed a super-majority. Instead it sputtered out at 98-44. The process, she admitted, has been "so much more complicated than it needs to be." What was most frustrating was that, contrary to the reactionary cant against it, the measure didn't mean immediate, random tax hikes. If the resolution passed an election to become a constitutional amendment, then county commissioners would have the option to hold a local election for a temporary tax rate increase to pay for specific projects. "The voters get the chance to say, yeah, the extra $5, $8 a month, we like it […] and when the capital improvement is complete, the tax will sunset." While she understands that no-one likes paying property taxes ("I'm a homeowner […] we've been priced out of a house just because of property taxes") she regretted that residents aren't being given the option. She added, "In Texas, we vote for everything. We vote for every judge, every JP, we vote for every county office, and people want that right."

It’s not all bad news. Two cases in point: HB 1507, allowing noise regulations in the state’s five biggest counties, and HB 4175, creating development buffer zones. She even got some builders backing that bill, she said, “Because it protects neighborhoods that they’re building, and retail or recreational facilities, from being overwhelmed by other uses like industry."

While she has some builder support for the development buffer zones in HB 4175, she’s already had word from the governor’s office that HB 1508, restricting direct waste discharge into the Edwards Aquifer, faces a veto after developer opposition. “There's concerns that limiting discharge permits will hinder growth," she said. She remains unconvinced. "There's ample evidence that the existing permit isn't limiting growth at all."

It’s a slow process, and with the clock ticking to zero hour at sine die, it would be all too easy for all her remaining bills to disappear. Still, she’s optimistic that, even if her bills don’t pass, there’s hope for next session. “Whether they actually make it to the floor and, making it to the floor, they actually pass, we’ve moved the ball down the field,” she said.