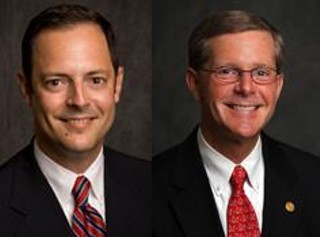 Anchia (l) and King: The "Belt, braces, and your pants still fall down" approach to democracy

The long, slow drag of a verification vote is one of the many, many reasons why bills die en masse in the House. The clerk first has to read the name of every rep, to make sure they are on the floor, then ask them to vote again, in alphabetical order, to ensure that the numbers were right. It's a pain and it kills bills waiting in the stack.

So imagine the surprise and annoyance of many reps when HB1654 by Rep. Rafael Anchia, D-Dallas, got not one, but two verification votes. The bill proposes finding four deputy voter registrars per Texas high school. Last night, Rep. Phil King, R-Weatherford, put forward an amendment requiring that the appointments be partisan, based on getting 20% of the vote in the most recent gubernatorial election (so basically two Dems, two Republicans.) Anchia rejected it and got the motion tabled.

In a totally unrelated step, when the bill passed second reading 73-72, King called for a verification vote. After the lengthy delay inherent in such things, it passed again.

So it was all over, right?

When it came to the floor for third reading today, King seemed no happier and tackled Anchia at the mike again. When it passed by a skinny 75-74 margin, guess what? King asked for another verification vote, which resulted in a 75-71 margin (it seems Anchia was better at keeping his 'aye' votes on the floor both times.)