Legeland catches up with the state rep for district 46 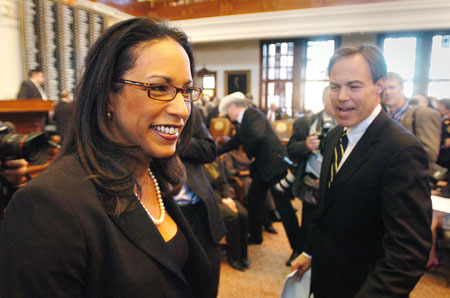 It could have been a far worse session for Rep. Dawnna Dukes. The only Travis County state rep on the all-powerful House Appropriations Committee, she's always worked hard to keep that voice for her district. Being a veteran means she's been able to work the system in tough economic times. "The way we funded CHIP to 300% of the Federal Poverty Level without a cost to the bill is we transferred $98.9 million in unexpended balances from last session because of a rider I put on the bill," she said. Yet that seat has had its costs. She was the only Travis County state rep facing a 2008 primary challenger. Former campaign staff have said that when she devastated Brian Thompson 61%-39%, the question asked was 'How did an ill-prepared candidate, fresh to the district, ever get so close?' Simple answer : She'd been written off as a Craddick D: An insult so heinous that her then-campaign manager Colin Strother compared it to a racial slur. Since then, she has been publicly welcomed back into the Democrat fold (To use one of Dukes' own favorite phrases from the campaign trail, "No permanent friends, no permanent enemies, just permanent issues") and kept that all-important appropriations seat.

So has the new dawn at session's start really become a new day for the lege? "For the very most part," she noted, diplomatically.

So what changed? "There are some changes in the dynamic of bill passage," she said. "You see a different array of individuals who have a higher percentage of bills coming to the floor, and it seems to be that less senior members are having a greater degree of success." The codicil, she added, is that it's still left to senior members to carry the more important reforms. 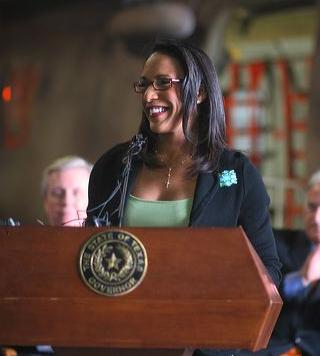 Rep. Dukes at the signing of HB 873 (Photo by Jana Birchum)

The high-profile win for Dukes has obviously been the beefing up of the Texas Moving Image Industry Incentive Program she got through in HB873. Her bill signing at Troublemaker Studios may go down as the last time before the 2010 gubernatorial elections that Gov. Rick Perry was a welcome guest at an event arranged by a Travis County Dem. Again, this all ties back to that Appropriations committee seat. Historians of the incentive program will recall that it was founded in 2005, but not funded until 2007, when Dukes spearheaded the charge for the cash. This time around, she said, “We’re confident that we’ll be able to find those funds from one place or another."

The big fight is making sure that all the projects she backs get the money they need, and that's been a long and on-going struggle. As the budget swelled, many Democrats allowed some of their programs to be shifted out of the main body of the budget, back into the Article XI wish list. Dukes fought long and hard to make sure that her programs, like the extended foster care support in HB 2860. Being a four-term veteran of the process, Dukes wasn't going to make that mistake. “We all know that article XI will not be funded,” she said. “It is a graveyard, and that’s why all the way through the appropriation process I hammered and hammered to get everything funded within the article, and not sent to Article XI. There were some who said I hammered too hard, and I should allow things to go into Article XI, so they would still be up for discussion. Well, now you see why I was saying no.”

Now even Article II, the Health and Human Services budget, is facing cuts. With Medicaid caseload costs rising by an anticipated $900 million to $1 billion, Senate Finance Chair Steve Ogden and Lt. Gov. DaVid Dewhurst are threatening to slice that out of unexpended balances and future appropriations elsewhere in the new budget. Dukes's opposition is clear: Apart from her resistance to slashing essential programs, it also breaks with tradition. The lege has rarely fully funded the caseload growth and instead "we always came back with a supplemental," she said. In her normal diplomatic terms, she noted, "It would be very difficult to get support on the House floor if we make cuts in Article II.”