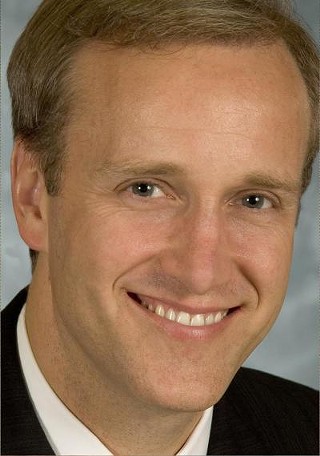 City Council member and distant runner-up in Saturday's election Brewster McCracken has announced he will not enter the run-off race against Lee Leffingwell, making Leffingwell the city's next mayor. A press conference for the two candidates is scheduled for later today.

After the fold, an e-mail from McCracken to supporters announcing his decision.

From the Brewster McCracken campaign:

To paraphrase W.C. Fields, all in all, I’d rather be in St. Louis.

While I am honored to have received sufficient votes to make it to a runoff, Saturday’s results clearly weren’t what I had hoped for.

I believe my campaign could have made a runoff election a robust competition, but I have concluded that going forward would not be in the best interests of Austin. It would have required an unprecedented fundraising effort that, in this economy, would have put an additional burden on my supporters. The cost of the election itself would have been expensive to taxpayers. And a runoff campaign likely would have become negative – which would have distracted the community from unifying around the ideas that formed the core of my campaign, and which ultimately became the consensus among the candidates in this election.

So, I’m writing to let my friends and supporters know that I have decided to withdraw from the runoff election for Austin mayor. We are coordinating an early afternoon press conference at City Hall in cooperation with Lee Leffingwell’s campaign team. I hope you can attend.

I offer my sincere congratulations to Lee and his team. I spoke with Lee this morning, wished him my best, and offered my assistance as he leads Austin through a difficult and historic period in our city’s history.

This campaign will end today, but my commitment to Austin’s future will not. My mentor and role model Pike Powers led Austin through the MCC and Sematech efforts that rebuilt our economy – and he did that after he had left elected politics. George Kozmetsky, whose vision and ideas deeply influenced my own, changed Austin’s future as a civically committed professor at the University of Texas.

I believe Austin has a unique generational opportunity to lead in tomorrow’s economy – in clean energy, biotech and the creative economy – and the examples set by Pike, Dr. Kozmetzsky and countless other Austinites remind me that there are many paths to making a difference in our community.

I’m also looking forward to the opportunities that emerge from disappointments – in particular to teaching my son how to play baseball and returning to writing fiction.

I am eternally grateful to the many supporters from across Austin who propelled this campaign. There are too many to list here, but I owe special words of thanks to Martha Smiley, my campaign treasurer, Heather Beckel, my campaign manager; my campaign staff – Colin Rowan, Celinda Provost, Jeff Brooks, Elise Flick, Sam McCabe, Jordon Hattery and Drew Johnston, my great council staff – Rossana Barrios, Rachel Proctor May and Mary Lou Rodriguez, as well as special friends like Austin Adams, JJ Baskin, Tim League and Jason Stanford. Together, we ran a campaign of ideas, and I’m proud of it regardless of the outcome.

And finally, and most importantly, thank you to my family. My son Ford is going to be very happy to have me home at normal hours for guitar playing and heated Chutes and Ladders and Go Fish battles. And I’m looking forward to quiet time my wife Sarah, who married me just months before this chaos began, who encouraged me throughout this journey and with whom I am looking forward to a lifetime of adventures.

In the weeks and months ahead, I urge everyone who supported my candidacy to push our ideas forward. Our ideas will be heard and addressed if we hold fast to what we believe Austin needs. And I truly believe our ideas will help Austin emerge from these tough times stronger than we were before.

Thanks again for your support,