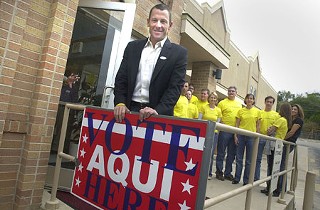 Lance wants you to vote. (photo by John Anderson)

Today is Election Day for municipal races in cities and school districts around Texas. Here in Austin, five city council seats including mayor are up for grabs.

Polls open at 7am and close at 7pm.

Turnout in last year's Austin muni elections was absolutely pathetic, even though some races were hotly contested. For a city that is allegedly "politically engaged," 8.25% turnout – a mere 35,000 voters in a city with a population of almost 750,000 – just doesn't cut it. Please go to the polls and play a role in your city's governance.

Go to The Austin Chronicle's Election Central for all kinds of info, and then go back there after the polls close for live coverage.