HB 710 will but ed board under Sunset review 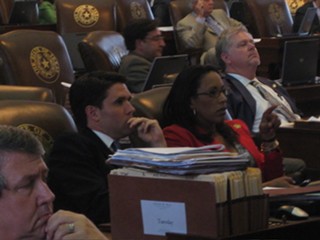 There go those darn malfunctioning voting machines again. For the second week in a row, an Austin-area legislator benefited from a vote result changing upon verification of the vote, with several lawmakers claiming their machines had “malfunctioned” – code for not present during the original vote, but returning to cast one, or changing their minds.

This time, it was Patrick Rose’s HB 710, one of the many bills before the 81st Legislature trying to rein in the shenanigans at the State Board of Education, which has drawn national attention (and ridicule) in recent years for certain members’ religiously motivated agendas. HB 710 narrowly passed the House, and that only after a recount.

Sunset review requires state agencies to justify their existence every 12 years; the commission can recommend abolishing an agency if it has outlived its usefulness, although Rose’s bill specifically stipulated abolition is not an option.

Conservatives – many of whom delight in the seven-member creationist bloc that has so embarrassed the 15-member board – lined up at the back microphone to assail Rose. One main line of attack was that Sunset should only target bureaucratic agencies, not elected bodies like the SBOE.

“We don’t do Sunset on elected officials,” claimed Warren Chisum, R-Pampa. “We don’t look at the governor’s office.”

“When you have people elected to office, it is the public that holds those officials accountable,” echoed Debbie Riddle, R-Tomball. “How is it that we can put ourselves over other elected officials holding them accountable … ?”

Rose pointed out that other agencies headed by elected officials fall under Sunset, including the Railroad Commission, the Department of Agriculture, and the Veterans Land Board.

“I think this is a very dangerous route that you are attempting to take,” Riddle warned.

“A review to the process to the benefit of taxpayers and schoolchildren is anything but dangerous,” Rose replied.

Riddle raised a point of order that, after a two-hour delay, was overruled, and Rose called for a vote. On first try, it failed 67-72, but after supporters called for verification of the vote, Rose apparently convinced four “nays” to defect, and three missing legislators made their way back to the floor, all accounted for as “malfunctioning voting machines,” for a new result of 74-68. The bill now must pass third reading and then go to the Senate.

Asked if the review – an audit, basically – would somehow change the politicized, ideologically driven decisions that have plagued the SBOE recently, Rose said, “Sunset Commission will not determine the outcome of the votes by those elected officials, but it is important that the responsibilities of the board and the processes by which the board makes decisions are subject to review.”