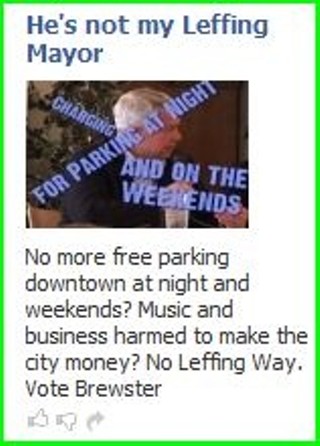 UPDATE: As of this writing at 4pm, it appears BrewsterNation.com has been pulled down. Read on …

If you’ve made it Downtown lately, you may have returned to your car to find a bright yellow “violation” notice stuck to the windshield. It’s not a real ticket, but a flyer mocked up to look like one, attacking Lee Leffingwell by saying he “wants you to pay for this spot on nights and weekends.” Similarly, on Facebook you may have noticed an ad depicting Leffingwell saying “He’s not my Leffing Mayor,” (see right) which links to a video purporting Leffingwell supports such parking charges.

Both ads are the work of the Brewster Nation, a self-described group of “representatives of Austin’s small business, creative, digital, and other tech industries” and “private citizens who support McCracken and a more creative and productive Austin.” The latter comes from the language on the violation flyers, which the group admits they paid for. But as far as campaigns go, it doesn't seem nearly sufficient enough a disclaimer. According to a press release, the group doesn’t see themselves as a political action committee, which may explain why there’s no disclosure on the ads, or information on file with the city.

Details about the group are extremely sketchy; their website has no contact info other than a generic email address. A Whois search says BrewsterNation.com is registered to Kimiko Tokita, a woman who is also named as a media contact in the press release announcing the website launch. However, in a comment on the Brewster Nation blog, the administrator writes “Brewster Nation is funded by a private Austin individual exercising his [emphasis added] right to free speech, and providing a web portal for others to share their opinion.” Tokita confirmed she was hired to work for the group by a figure who, for now, wishes to remain anonymous.

As for the substance of the claim, the topic emerged at a combined urban issues forum in April. There, Leffingwell described how at an Audit and Finance subcommittee meeting, he suggested Transportation Department director Robert Spillar “take a look at charging for parking at night and on the weekends” once the city moves from parking meters to a computerized kiosk system that can charge different rates at different hours. “The fact is that Lee has not proposed it, he's not even necessarily for it, he just told Spillar we should ‘look at it.’” Leffingwell campaign consultant Mark Nathan says. Moreover, Nathan calls the ads “as illegal as illegal can be,” noting there is “obviously no disclaimer language on any of the materials, so the party is anonymous.” Moreover, he says “at this point in the election, any expenditures of this type are required to be filed with the City Clerk within 48 hours, along with a sworn statement that the expenditures were made without the prior knowledge or consent of the candidate whose election is being advocated.”

McCracken’s spokesperson Colin Rowan says “It's an independent group. The campaign, nor Brewster, has not been involved with the creation of the materials.” (The Brewster Nation blog does contain a note from McCracken saying “I don’t know who you are but what you are doing is very creative and cool - just what Austin is all about!” and thanking them for their support.) As for the group as a whole, Rowan writes “It's very focused on one particular issue – one that hasn't really come up during this race. But clearly, they care a lot about the issue. I think everyone is better served when efforts are fully disclosed, but I'm not going to issue a legal opinion about their activity.”

Below, the forum video popularized by Brewster Nation.

UPDATE 2: It appears that the video described above, titled "metergate2009", has been removed from YouTube.