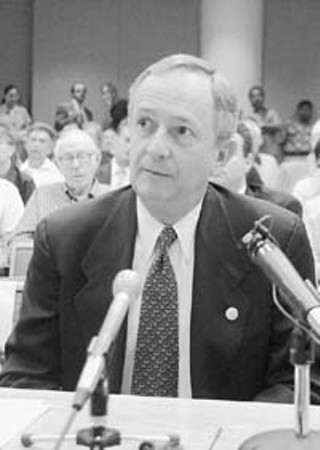 If you've lived in Texas and followed our politics since at least 2003, you remember how the former, now disgraced, U.S. House Majority Leader DeLay hammered an unusual mid-decade redistricting plan (which we derisively tagged "re-redistricting") through the Lege so as to give Republicans a gerrymandered increase in the Texas Congressional delegation.

Wentworth’s SB 315 would take Congressional redistricting out of the hands of the Legislature and give it to a nine-member appointed committee (four Democrats, four Republicans, and a ninth appointed by the other eight). It takes two-thirds support to bring the bill to the floor for debate, but Wentworth says he has only 20 senators in his corner, one short of the magic number.

Wentworth, a moderate Republican, said he's been pushing for reform of Congressional redistricting since 1993, when Democrats were in power, and still supports now that his party is in power.

On Monday, he promised an amendment to make it more palatable to holdout Republicans, but finally pulled down his motion for debate when it was obvious no one would budge.

“I’ll keep trying every day until it looks like I have the votes,” said Wentworth, who has been pushing for such a committee since 1993. “I’ll wait until either a senator is absent [and thus 20 votes would suffice], or I can persuade someone to change their mind.”