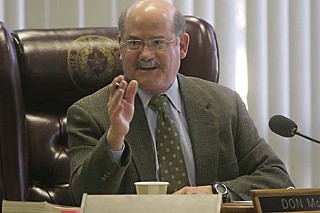 That may come as a surprise to those who have followed the shenanigans of the creationism-supporting McLeroy and his allies on the board, because Sadun has consistently testified against that bloc's attempts to water down high school science education. Sadun is considering a 2010 run against Place 10 SBOE representative Cynthia Dunbar, one of the most vocal members of that wing.

But Sadun draws a distinction between his philosophical disagreements with McLeroy and his handling of the bi-monthly meetings: "[I]n all the meetings that I have attended, he has wielded the gavel with courtesy, respect and scrupulous fairness," Sadun said in a letter to the editor. "The Senate should simply judge the job he has done as chairman and confirm him in that role."

While SBOE members are elected, the chair is decided by gubernatorial appointment subject to confirmation by two-thirds of the Senate. McLeroy came under withering fire last month in the Senate Nominations committee from El Paso's Eliot Shapleigh and Austin's Kirk Watson, and committee chair Mike Jackson of La Porte is currently keeping McLeroy's appointment from the Senate floor because he doesn't think he has the 21 votes necessary to confirm.