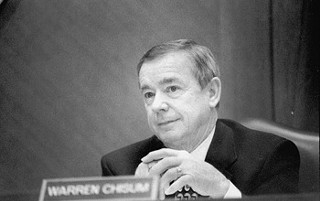 Rep. Warren Chisum's plan could make it difficult for more than 100,000 women to access reproductive health care (by Photo by Jana Bichum)

With the House version of the state budget set for debate on the floor starting tomorrow morning, Rep. Warren Chisum, R-Pampa, is now proposing an amendment that women's health care advocates say would completely undo the state's system for providing reproductive health services to low-income women. "If the goal here is to just totally dismantle women's access to care, then [Chisum's] done a great job," says Sarah Wheat, vice president for community affairs for Planned Parenthood of the Texas Capital Region.

The Chisum amendment would completely rearrange the way Texas' Dept. of State Health Services allocates roughly $42 million in funds to family planning providers -- a reorganization of "funding priorities" that would make the agency's lowest funding priority a large group of providers that currently provide services to the vast majority of women. Not surprisingly, this group includes a number of clinics run by Planned Parenthood -- it seems clear that defunding Planned Parenthood (an ongoing pet project for the right), is the goal of the Chisum amendment. Although the state currently serves just 17.5% of the more than two million women in need of reproductive health services -- often the only health care that low-income women receive -- it appears that figuring out a way to increase access to services is taking a backseat to that decidedly myopic goal. Indeed, in an April 16 email to supporters, Joe Pojman, executive director of the Austin-based Texas Alliance for Life, announces an "URGENT LEGISLATIVE ALERT," calling on "friends" to "immediately" call lawmakers and encourage them to vote for the Chisum measure "to de-fund Planned Parenthood from the state budget."

Lawmakers, however, can't be that direct -- singling out Planned Parenthood as a target wouldn't pass legal muster. Instead, Chisum has cobbled together a convoluted scheme for prioritizing which groups receive funding, with a limited number of county health departments presumably at the top of the list. Last in line for funding would be roughly two dozen providers that last year served just more than 50% of women receiving family planning services. The Chisum plan would actually "make it most difficult for the providers who see the most clients day in and day out to get funding," says Wheat.

According to Fran Hagerty, CEO of the Women's Health & Family Planning Association of Texas, the providers in this group last year served 128,370 clients. Conversely, the public entities that would receive funding first under Chisum's proposal served just 12,735 clients last year -- less than 1% of the total number of women served. And Wheat says that the number of priority one providers might actually decrease if Chisum's proposal becomes law. Those groups would essentially be forced to agree to a "gag rule" that would prohibit them from referring clients to other community resources, like Planned Parenthood, that offer abortion counseling and referrals. In Austin, says Wheat, the Travis Co. health department regularly refers clients to Planned Parenthood, and vice versa, typically as a way to ensure a client receives the most timely and affordable care possible. For example, she says, if a woman were to go to the county seeking treatment for a possible urinary tract infection, but they were unable to see her within the week, they might refer the client to Planned Parenthood, which generally can see a client within one to three days, she says. Under Chisum's proposal, the county would be banned from making that referral. "In the medical community here in Austin, we refer back and forth constantly," she says.

In theory, of course, if the providers in the higher priority categories had access to additional funds they would be able to see additional clients, absorbing the more than 100,000 clients that ultimately could lose access to their provider of choice. In reality, Hagerty says it is hard to imagine that these priority providers would actually be ready to pick up the slack by September 1, the start of the new fiscal year. At least that's they way it played out in 2005, when a budget rider authored by Sen. Robert Deuell, R-Greenville, became law. That rider directed DSHS to shave $10 million each year from the family planning budget to first fund Federally Qualified Health Centers, which provide a number of other primary care services in addition to family planning.

Although it was sold as a way to increase access to comprehensive health care for low income women, the rider has yet to deliver. In 2005, before the rider took effect, the state's family planning program provided services to nearly 670,000 clients. In 2006, however, after the rider took effect, the number of clients served dropped to 442,000; the number of women served has declined in each subsequent year. Meanwhile, there have not been enough FQHCs using the funding opportunity to expend the entire $10 million allocation. As a result, each year the Centers have actually returned millions in unspent funds to DSHS. As the number of clients served decreased from 2006 through 2008, the amount of funds allocated under Deuell's set-aside that has been returned to the state has actually increased, from roughly $2.5 million in 2006 to just more than $4.2 million in 2008. The number of women in need of services continues to grow, and it is hard to imagine things would get any better under the Chisum plan. "From a [client] service perspective, this is just awful," says Hagerty.

Thus, although Chisum's measure is pitched as a way to increase women's access to comprehensive health care, it is unlikely that would be the result. Under the amendment, DSHS would be required to first fund public entities that provide family planning services "including state, county, and local community health clinics" that do not refer pregnant women to abortion providers or to organizations that perform "elective abortions for any family planning services." Second on the list are "non-public" entities that provide "comprehensive primary and preventative care" in addition to family planning services, but which also do not refer women to abortion providers or to organizations that perform abortions as part of family planning services. (Chisum's amendment also says a provider under these two groups is prohibited from performing abortions -- language that is, essentially, unnecessary since no public funding can be used to provide abortions.) The providers that would appear to be eligible for top priority funding are public health districts -- including, presumably, the Austin-Travis Co. Health and Human Services Dept. as a public provider, and community clinics, like the Community Health Center of Lubbock, among private providers.

Lower on the priority list would be public entities that provide family planning services and private entities that provide comprehensive primary and preventative care in addition to family planning, but without the restrictions on referrals to abortion providers or those that perform abortions. This could include major urban community hospitals, and smaller non-profits like Austin's People's Community Clinic. The key difference between these two groups and those in the first and second funding priority groups is that these latter categories include providers that use federal Title X funds. Among the requirements of Title X, is that grantees provide women with so-called "options counseling," which includes information about and referrals for abortion care if requested.

Last on the list is everyone else -- including, it seems, at least 10 Planned Parenthood clinics.

Despite the lack of demonstrated success with the FQHC rider, Deuell last month proposed allocating the entire family planning budget to county health departments and FQHCs. That proposal died in committee -- but, it appears, Chisum has now stepped up to give it a go. If the measure were to pass, says Wheat, "it would be absolutely calamitous," and "tens of thousands or women would no longer be able to access basic preventative health care."

In addition to Chisum's, there are four other proposed amendments, authored by members of the Legislature's Conservative Coalition, that would divert money from family planning to other programs -- including a proposed $20 million diversion to fund children's mental health services (proposed by Rep. John Davis, R-Houston), and one that would funnel an additional $1.5 million to the Alternatives to Abortion program (authored by Rep. Kelly Hancock, R-Richland Hills), which provides funding for "crisis pregnancy centers" (unlicensed and unregulated groups that provide no medical services) to "promote childbirth." The Davis amendment could displace more than 114,000 women in need of reproductive health services, according to Hagerty, while the Hancock amendment could knock more than 8,500 women out of services.

The House debate on the budget, including proposed amendments, is slated to begin Friday morning.