Creationist Bills at the Lege

"Does Texas really need that kind of crazy?" 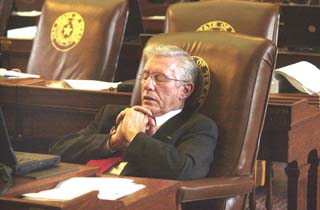 Frustrated thus far by failed attempts to promote creationism at the State Board of Education, proponents of the pseudoscience are now taking their battle to the Legislature. Two bills have caught the eye of the Texas Freedom Network, a nonprofit political advocacy group that combats the religious right.

Last year, the Dallas-based Institute for Creation Research’s proposal for offering online masters degrees in science education got shot down by the Texas Higher Education Coordinating Board, which has legal authority to shut down diploma mills. In an 8-0 unanimous vote, the board said the ICR’s proposal wasn’t based in … um … science.

Rep. Leo Berman, R-Tyler, has come up with a simple enough way to deal with that: Write a bill (HB 2800) saying that the board no longer has authority over private “schools” that do not accept state or federal funding.

The problem with this is rather obvious: “If HB 2800 became law,” said Steven Schafersman of Texas Citizens for Science, “it would be a gold mine to every fly-by-night, degree-granting outfit in the country." Berman wasn’t the least bit apologetic, telling the Statesman, "I don't believe I came from a salamander that came out of a pond."

Almost as blunt is HB 4224 by Rep. Wayne Christian, R-Center. Similar to the ICR’s failure, attempts to keep a requirement that public school educators teach the “strengths and weaknesses” of scientific theories have narrowly come up short at the State Board of Education, although the proposal to retain the language in the Texas Essential Knowledge and Skills rules comes up for a final vote next April.

An SBOE-appointed panel of scientists and educators favors deleting “strengths and weaknesses,” in part because creationists have seized upon the wording as a wedge to push creationism into classrooms – or at least create doubt about evolution.

Christian would short-circuit that vote by just flat-out ordering the SBOE to keep the language. The bill also would mandate that, “no student in any public school or institution shall be penalized in any way because he or she subscribes to a particular position on scientific theories or hypotheses,” and “no governmental entity shall prohibit any teacher” from teaching “strengths and weaknesses using scientific evidence and information.”

“Lawmakers should call this the ‘Kill Science in Texas Act,’” said TFN’s Kathy Miller. “It would open the door to teaching public school students almost any notion that someone wants to portray as ‘science,’ regardless of what school administrators and real scientists have to say about it.

“This bill is so bad that someone could teach that maybe the sun really revolves around the earth, and school administrators couldn’t do anything about it,” Miller said. “Does Texas really need that kind of crazy in the 21st century?”