TxDOT Puts Lipstick on the Pig 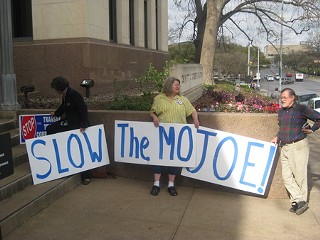 Time waits for no man, and neither does the Texas Department of Transportation.

Thursday, brushing aside pleas to delay and reevaluate from environmentalists, anti-tollers, and some legislators – and concerns they might be violating the law – the Texas Transportation Commission, which oversees TxDOT, committed $1.2 billion in federal stimulus money to a variety of roadway projects around the state. This follows previous approval of $500 million in stimulus money for maintenance projects.

It ended a rough week for TxDOT, but may have been only the beginning of a rough Legislative session for them – they face Sunset Review this year. Early in the week, Waco Rep. Jim Dunnam, chair of the House Select Committee on Federal Economic Stabilization Funding, tore into TxDOT Executive Director Amadeo Saenz when the latter admitted that, despite what the American Reinvestment and Recovery Act requires, his organization had not considered “economically distressed areas” when prioritizing how to spend the $500 million. “We are subject to being charged back this money if y'all don't spend it in compliance with statute," Dunnam complained.

Later, a resolution on the House floor from Houston’s Garnet Coleman and co-authored by Dunnam read, in part, “[The House] declares that the failure of the commission and the department to conduct the people’s business in a fair, open, and accountable manner has lost them the confidence of the House and of the people of Texas.” Coleman eventually pulled it down because some felt the language was a bit much, but the point was made and he and Dunnam were hardly alone.

To ameliorate the concerns, TxDOT retroactively added 10 projects to the original 266 maintenance items, all in counties meeting the EDA definition. On the new roadway projects, they added six to the original 23 staff recommendations, four of which were in EDAs.

It was pretty obvious early on how the commission would vote. They had already postponed their decision by a week after requests by some legislators, and they weren’t in the mood to do it again. The commission acted as if it need to rush, but the ARRA requires only that 50% of the projects be obligated within 120 days of March 3 (meaning June 30).

As local officials pleaded with commissioners to approve projects in their areas, more than one jokingly got asked by Ted Houghton of El Paso, “So you’d like us to delay this, right?”

When environmentalists and anti-toll-roaders went to the mic, Houghton lost his smile and became combative. When activist and former Democratic Agriculture Commissioner candidate Hank Gilbert denounced foreign-owned toll roads, Houghton said, “You’re bigots, is what you are … and that’s unfortunate.”

Gilbert, who was talking simultaneously, said, “I’m what? I didn’t hear you.”

“You heard what I said,” replied Houghton.

“Yes, you did,” said Houghton. “It’s unfortunate that people don’t see that, when you talk about foreigners, and you talk about our friends across the Rio Grande River.”

“I don’t believe that’s what I was talking about, commissioner,” said an exasperated Gilbert.

The changes did not mollify Dunnam, and it’s not clear if they’ll satisfy the feds, either. “The requirement of the federal act is, before approving any projects, they give priority to economically distressed areas,” Dunnam said. “They went in after the fact and added a few for appearances’ sake, and that’s pretty transparent.”

Asked the question many have wondered for years – is TxDOT out of control? – Dunnam said, “No, I think frankly the governor is out of control. They report to him, they are really accountable only to him, and he continues to drive this toll road agenda right down everyone’s throat despite overwhelming public opposition, overwhelming opposition in the House and Senate. Blaming TxDOT is really missing the big picture.” 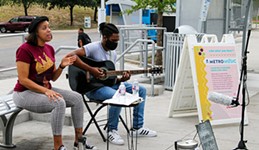 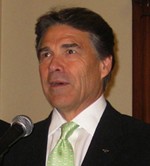