And political sign manufacturers everywhere breath a sigh of relief: It's another election cycle (Photo by Richard Whittaker)

What's campaign season without free nachos and sausage slices on a cocktail stick?

Bill Spelman had his official return-to-council campaign kick-off last night down at Scholz Garten. So far, the LBJ School of Public Affairs professor is the only person running for Mayor Pro Tem Brewster McCracken's Place 5 seat, which Spelman held from 1997 to 2003. Attendees for the bash included an array of familiar local political names, including Mark Yznaga, Tim Mahoney, Jack Kirfman and Margot Clarke (who had her own unsuccessful shot at Place 5 in 2003.)

Back in 1997, the Chronicle gave a joint endorsement to Spelman and his opponent Bobbie Enriquez. Spelman received some criticism for breaking what some saw as the "gentleman's agreement" that Place 5 was the 'reserved' Hispanic seat on the council, but soon gained a reputation as an guiding voice on council on controlled development and departmental accountability.)

For those interested in political launches in local iconic eateries, Place 1 candidate Chris Riley will be having his campaign kick-off at Threadgill’s World Headquarters, 301 W. Riverside at 6pm tonight, Jan. 23. 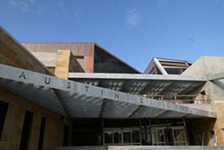