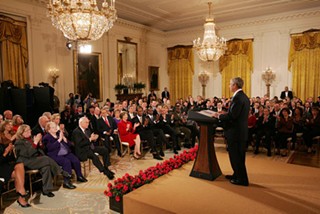 Pres. Bush: One last go at a coherent speech

Anyone expecting a Eisenhower-style warning from President George W. Bush in last night's farewell address should have known that they were in for a disappointing night. But they may not have expected a sales job for faith-based initiatives.

Because his administration has been so tied up with foreign policy, the immediate analysis centered on his claims of spreading freedom like free snow cones on a hot day. So while foreign policy experts are picking their jaws off the floor at the seemingly irony-free statement that "when people live in freedom, they do not willingly chose leaders who pursue campaigns of terror," the domestic policy notes may get passed over.

But on his way out the door, the real advocacy out of the legacy project was for his Office of Faith-Based and Community Initiatives (aka, when your policy grows lemons, give churches tax dollars to make lemonade for you) and charter schools: two conservative touchstones that aren't going anywhere soon. And while pundits like MSNBC's Chris Matthew's have noted that he didn't become a foreign policy ideologue until he got to DC, this is something that President Bush picked up back when he was Governor Bush (not forgetting, of course, that President-Elect Barack Obama likes them enough to reform rather than dismantle them.)

It began simply enough: "The addicted and suffering," he said, "are finding new hope through faith-based programs." But where it got really interesting was his selection of people in the audience that exemplify his image of civic life in America: "Dr. Tony Recasner, a principal who opened a new charter school from the ruins of Hurricane Katrina. We see it in Julio Medina, a former inmate who leads a faith-based program to help prisoners returning to society."

Recasner established the innovative Samuel J. Green’s Charter School in New Orleans (which has become a testing ground for charter schools), which Bush visited in March 2007. Medina is founder and CEO of New York's Exodus Transitional Community, Inc., and was sat three seats away from Laura Bush during the 2004 State of the Nation Address.

So, just to clarify, with the Bush administration's record when it comes to Hurricane Katrina reconstruction and response, and the fact that the US has the highest prison population in total and per capita of any nation (in no small part due to the War on Drugs), he used his farewell to throw more red meat to the Christian conservatives.

Now this, this is how you do a farewell address: