Day of hard feelings in Senate comes to end 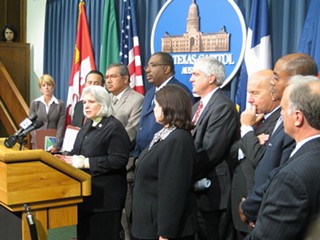 The Texas Senate has voted, 18-13, to scrap its rule requiring a two-thirds vote of the membership to bring a bill to the floor for debate if a voter ID bill comes up.

Democrats – and one Republican, John Carona – argued passionately against the rule change, but the rest of the GOP wouldn't budge.

More on this later tonight.

UPDATE: Okay, I lied, I'm too exhausted to follow up on this tonight. I'll just say that the Dems followed the vote with a very bitter press conference warning that Dan Patrick and his buddies may really, really regret the precedent that they set today, especially when the state's demographics tilt toward the Dems. Tomorrow I'll dig out the juiciest quotes from today.