Live from the House

Regular updates from the swearing in Gov. Perry stops by in the legislative equivalent of seeing if your high school locker is still there (Photo by Richard Whittaker)

1.59pm: After the brief obligatory appearance by former state rep Gov. Rick Perry (“Grab a deep seat. It’s going to be a long ride,” he advised the freshman legislators), Reps. Charlie Geren and Burt Solomons get to do some house business about House Rules and keeping the committee staff on until their next budget is sorted. Solomons will hold the world’s smallest working group with himself and the Parliamentarian tomorrow on rules changes. But in the biggest sign of the change of the order of things, Speaker Straus recognized former Speaker Tom Craddick to make the motion to adjourn and introduce the list of former legislators that died in the interim. Then, with a clack of the gavel, Speaker Straus adjourned the session until 10am tomorrow. 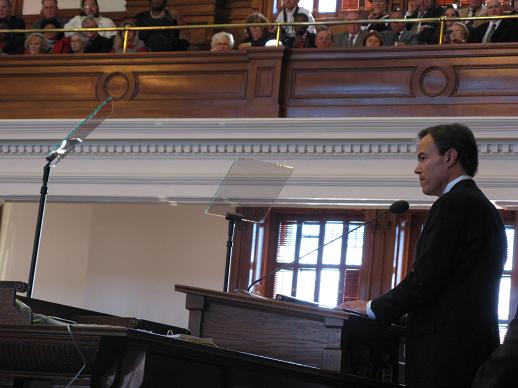 Speaker Straus delivers his first speech (Photo by Richard Whittaker)
1.43pm: Speaker Straus's speech struck all the right notes for the mood of the event: Bipartisan, forward-looking, bereft of loaded language, and, most importantly, with the obligatory tribute to outgoing Speaker Tom Craddick and his wife, Nadine. So far, only Rep. Veronica Gonzales, D-McAllen, has mentioned his name, but Straus' comments got Rep. Tom Craddick, R-Midland (that's going to be weird to get used to) a standing ovation. Focusing attention back on policy, he emphasized that it was time to cross both party divides and the urban/rural split.

1.26pm: Flanked by the committee that followed him to the dias, Straus just took the oath (Fellow Gang of 11 member Rep. Tommy Merritt, R-Longview, was so elated that he started throwing victory signs to the gallery.) Straus has now launched into his speech.

12.54 pm: Seems the talk of bipartisanship is serious: After Rep. Senfronia Thompson, D-Houston, got to deliver the first seconding speech, Rep. John Smithee, R-Amarillo, got to deliver the second seconding. Significant, because while Straus was initially slammed as the Democrat's choice, it was Smithee that lead the last stand against him. Third up is Rep. Burt Solomons, R-Carrollton (who was one of the founding members of the Gang of 11 that spearheaded the Straus resolution), followed by Rep. Jim McReynolds, D-Lufkin, and Rep. Veronica Gonzales, D-McAllen. Every one praises the same aspects of his time in the House that they think make him a good speaker. McReynolds called him "his own person … who resists pressures of conformity," and challenged any member to say they'd ever heard him say anything bad about another member ("I will not recognize you if you raise your hand," he added to giggles from the floor.) Solomons called him non-partisan on working towards the good of the state. Thompson puts it simply: "I trust Joe. He keeps his promises." 12.38: Who gets to crown the king? The reps that get to start the process of selecting the next speaker are obviously getting some early momentum. Rep. Charlie Geren, R-River Oaks, introduced House Resolution 70, which opens the speaker nomination process and Rep. Craig Eiland, D-Galveston was given the honor of seconding the resolution. The real kudos stays in Bexar County as Rep. Jose Menendez, D-San Antonio, gets the big spotlight moment of nominating (drumroll please) Rep. Joe Straus, R-San Antonio. Why is Dem Menendez backing GOPer Straus? Because they worked together so well on establishing the state's cord blood bank back in the 79th lege. Rep. Senfronia Thompson, D-Houston, gets to give the first of probably many seconding speeches. 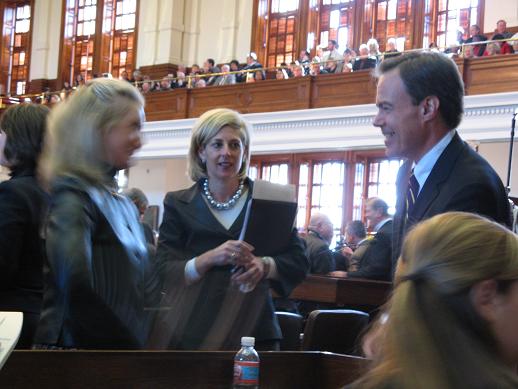 12.35pm: After the reading of the full list of members to confirm quorum (comedy highlight? Returning Rep. Al Edwards, D-Houston, yelled "I'm back!" when his name was read), the House is formally sworn in. Moments later, the delegation from the Senate appeared and said they're ready to do business. Now it's just a question of who gets to be speaker.

12.23pm: Big, if not unexpected news. The clerk of the House has just read out the names of the temporary officers, and Terry Keel is definitely gone as parliamentarian. His replacement: Denise Davis, the parliamentarian who refused to bow to Speaker Tom Craddick's will last session and quit to be replaced by the unpopular former Travis County rep. 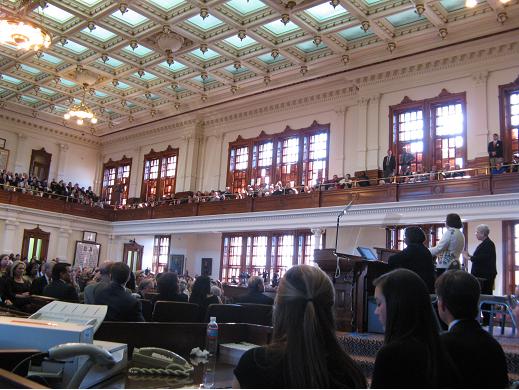 Secretary of State Hope Andrade: Possibly the most high-profile day of her biennium (Photo by Richard Whittaker)

Secretary of State Hope Andrade gets to officiate today, so it was she that got to gave in the session down in the House. She, like everyone else, probably expects this to be much more peaceable than the bloody fight that engulfed the House two years ago.

Archbishop Daniel Cardinal DiNardo of the Catholic Archdiocese of Galveston-Houston, gets to deliver the invocation. Does this mean the Lege won't forget the island?

In her speech, Andrade is stressing that this is a time of change, but also that there needs to be some "The focus should not be on where we come from or how we got here," she said, "but where we are heading."

She took time for a quick quote from Pres. Eisenhower: "The opportunist thinks of me and today. The statesman thinks of us and tomorrow." Generously calling this a room filled with statesman, she noted that Texas is still one of the more viable state economies. Her list of imminent tasks for the house: Educational opportunities, safe communities, a good environment for business.