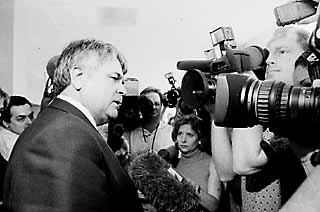 A lawyer for yogurt shop murder defendant Robert Springsteen said today that additional DNA testing has now revealed at least two unknown male profiles, this time found on vaginal swabs taken from two victims, sisters Sarah and Jennifer Harbison. The DNA does not match any of the four suspects that prosecutors insist committed the grisly December 1991 murders, prompting Springsteen attorney Joe James Sawyer to argue – once again – that his client is not guilty and should be set free after spending nearly 10 years behind bars.

This is the second time this year that new DNA testing of vaginal swabs taken from the crime scene has revealed previously undetected male DNA that has not been matched to any donor known to Travis Co. prosecutors. In April, a vaginal swab taken from the youngest victim, 13-year-old Amy Ayers (who, by all accounts, was not sexually active at the time she died) was retested by the state using a new and more precise DNA testing not available until recently. The results of that test revealed the previously undetected male profile that to date has not been matched to anyone – including the four men charged with the crime, Springsteen, Michael Scott, Maurice Pierce and Forrest Welborn. At the time, prosecutors Gail Van Winkle and Efrain De La Fuente told the Chronicle that they expected the DNA would quickly be matched to a person already known to the state, but that did not happen. To date, dozens of samples have been tested – including DNA samples from public safety officers who responded to the crime scene – but none have been matched to the extracted DNA profile. On Dec. 30, Sawyer said defense attorneys for Springsteen and Scott, the only two suspects the state has tried for the crime, received word that additional testing requested by defense attorneys has now revealed at least two, and possibly three, unknown male DNA profiles on vaginal swabs taken from the Harbison sisters. Whether either of these profiles matches that found in Ayers is still unknown, he said.

De La Fuente and Van Winkle could not be reached for comment regarding the results of the most recent DNA testing.

Springsteen and Scott are two of four men originally charged with the grisly quadruple murder of four girls inside a North Austin yogurt shop on Dec. 6, 1991. The girls – Eliza Thomas, 17; Jennifer and Sarah Harbison, 17 and 15; and Ayers – were found dead in the back room of the shop, horribly burned in a fire police said was started to cover the crime. It wasn't until 1999 that prosecutors and police announced that they'd found the murderers – four men who, at the time of the crime, were also teens. Springsteen was tried and convicted in 2001; Scott was tried and convicted in 2002; Pierce – who prosecutors claimed was the "mastermind" behind the crime – was indicted and spent four years in jail before the D.A.'s office dismissed the charges in 2003, saying they lacked enough evidence to convict him. The case against Welborn, who prosecutors said acted as a getaway driver, was ultimately dropped after two grand juries failed to indict him.

The state's case against the four is entirely circumstantial, relying heavily on two separate "confessions" provided by Springsteen and Scott, obtained by Austin police in 1999 after lengthy, and arguably coercive, interviews during which the two incriminated not only themselves, but also each other for the crime. (Notably, Springsteen and Scott were not the only two to confess to the murders; police collected at least 50 confessions, some of which sources have said are far more compelling in detail than those of the defendants.) But the convictions of Springsteen and Scott were ultimately overturned on appeal because the trial court erred in allowing the state to enter into evidence portions of one man's confession as evidence in the trial against the other, denying each man's Sixth Amendment right to confront witnesses against him. In 2004, the U.S. Supreme Court, in an unrelated case, ruled that confrontation was the only way to satisfy the Confrontation Clause, and eventually the Texas courts booted the Springsteen and Scott cases back to Travis Co. for further proceedings – but without the ability to bolster their cases by using as evidence the confession of a nontestifying co-defendant. Both men recanted the substance of their statements to police and maintain their innocence.

Importantly, there was no physical evidence found at the crime scene directly linking any of the defendants to the murders. There are fingerprints, for example, that have never been matched to anyone. And now, defense attorneys say that the "new" DNA evidence found inside three of the four victims makes it clear that their clients are not guilty. "To a scientific certainty we have excluded all four of these [men]," said Sawyer. And yet, he said, prosecutors continue to rely on "confessions [without] a shred of physical evidence" to confirm their theory of the crime.

Sawyer said there is still additional testing to be done, but that he intends to ask District Judge Mike Lynch to release Springsteen on bond.

Springsteen and Scott are slated to return to court on Jan. 7 for another pretrial hearing.