Rep. Dunnam: Hoping to be the new kingmaker

After the 11 confirmed anti-Speaker Tom Craddick Republicans made their announcement of unity last week and Rep. Dan Gattis, R-Georgetown, announced his own speaker candidacy, now Rep. Jim Dunnam, D-Waco, has reminded everyone that he still has the biggest unified voting block. The House Democratic Caucus chair has released his list of 64 ABCDs – the Anyone But Craddick Democrats that have pledged that, well, they won't vote for Craddick.

This doesn't mean the ABCDs have all backed one candidate, but it does mean that, if the lines hold, Craddick has 76 votes against him.

So the question remains: Who are the ten Democrats that didn't sign the pledge? The only local rep who held off is Dawnna Dukes (no surprise to anyone, since she has consistently stuck to the line that she'll vote for the candidate that will do best for her district.) The rest are all either long-term loyalists like Rep. Al Edwards, D-Houston (back after being replaced for one session by Borris Miles) and Speaker Pro Tem Sylvester Turner, or have done surprisingly well on committee chairmanships under Craddick.

However, just because they didn't sign the pledge doesn't mean they'll be voting for Craddick on Jan. 13. For the full list of the no-shows, see below. 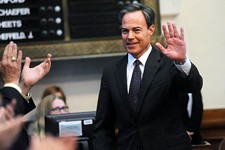