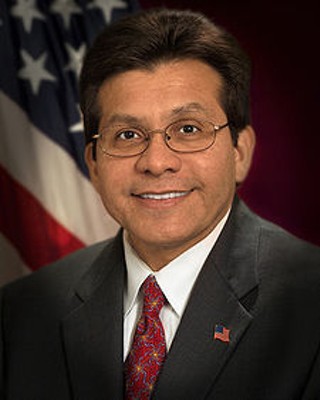 Alberto Gonzales: Maybe not the Christmas present he was wanting

A new report, entitled Senate Armed Services Committee Inquiry into the Treatment of Detainees in U.S. Custody, blows apart the myth that somehow torture and prisoner abuses in the War of Terror were just, y'know, something that happened.

So how damning is the report?

"The abuse of detainees in U.S. custody cannot simply be attributed to the actions of 'a few bad apples' acting on their own. The fact is that senior officials in the United States government solicited information on how to use aggressive techniques, redefined the law to create the appearance of their legality, and authorized their use against detainees. Those efforts damaged our ability to collect accurate intelligence that could save lives, strengthened the hand of our enemies, and compromised our moral authority.

Yikes. The trail goes all the way back to Team Torture – the nickname for the Bush cadre that set about deliberately creating a legal framework/series of loopholes. That includes Secretary of Defense Donald Rumsfeld, Deputy Assistant Attorney General John Yoo, Assistant Attorney General for the Office of Legal Counsel Jay Bybee, Counsel to the Vice President David Addington and Texas' own Counsel to the President Alberto Gonzales, who worked to create a veneer of legality (anyone else not shocked by the Gonzo revelation, since he has been accused of turning a blind eye to Texas Youth Commission abuse allegations in 2005.)

These legal experts carried on even though, as early as Nov. 2002, the armed services were sounding alarm bells about the illegality of the interrogation techniques.

Central to all this are claims about SERE – Survival Evasion Resistance and Escape. This is how troops are trained how to resist torture: Instead, the administration turned the SERE techniques on their head, to create better tools to break people. Not to get information from them, just to break people.

The report has bipartisan support, signed off by committee chairs Sens. Carl Levin, D-Michigan, and John McCain, R-Arizona (Yup, that John McCain. There's more than a few pol watchers who expect, now that he's out of the insanity of the campaign bubble, McCain may actually rebuild his reputation, altough not necessarily with his own party.) So, the question is: Will anybody face charges?

Attorney General, or Witchfinder General?
Can’t get a straight answer from Attorney General Michael Mukasey as to whether waterboarding is torture or not? Just ask the UT History faculty!