A Changing of the Guard?

Austin's political scene has its fair share of familiar faces and repeat candidates. Yet, post-election, it seems like there's a bunch of vacancies opening up in the progressive and third-party roster as some old hands stand down.

First Bill Spelman downgraded expectations by saying that he wasn't going to run for mayor, instead going for Place 5 on the council: Then Jackie Goodman announced that she was out of the mayoral race too. Now Libertarian Party of Texas executive director/former council and county commissioner candidate/Stop Domain Subsidies activist Wes Benedict has told the Chronicle that this was his last election in the state and that he's applied to be the national Libertarian Party's executive director (check tomorrow's issue for the details and his back-up plan).

That was big enough in campaigning circles, but now anti-toll road campaigner and People for Efficient Transportation founder Sal Costello (aka The Muckraker) has announced on his blog that he's moving to Illinois.

What's next? Leslie hanging up his thong? 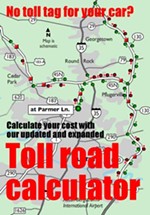 CAMPO Seeks Input Tonight
On financially linking 183A and US 290