State Dems make bipartisanship an offer and a warning to GOP

Here's a challenge for you. Try to find a bigger grin in Texas politics than Rep. Jim Dunnam, D-Waco and head of an expanded Democratic caucus. 74 seats is still shy of that majority he wanted but, as he and Texas Democratic Party Chair Boyd Richie pointed out at this morning's press gaggle at the party headquarters, gains like this on the GOP's gerrymandered map are a big sign of the future of Texas. Richie was doubly happy about the big judicial gains made, especially in Harris County ("24 out of 27 ain't bad").

There's little doubt that Dunnam thinks he can get traction for the Democratic agenda, and that the Republicans better start thinking bipartisan. Flanked by two of the night's other big winners (the freshly-elected Senator Wendy Davis and new Third Court of Appeals Chief Justice Woodie Jones), new House District 52 rep Diana Maldonado summed up the change in the mood across the state and the perceived rejection of the current state leadership's 'our way or the highway' mentality when she said, "We need to change the welcome map to be more inclusive." 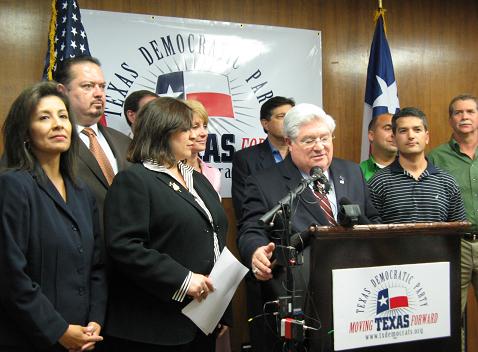 Of course, there's still some dust to settle. When asked why he was so confident the Demas would pick up HD-105, which looks headed for a recount, to tie the chamber Dunnam said, "I'm an optimist." When asked for a little more detail, he grinned broader and said, "That's what optimism's about" (It was left to TDP spokesman Hector Nieto to confirm that the party was sending attorneys to Dallas County).

Finally, the issue of Tom Craddick's speakership came up, and in spite of all the questioning, Dunnam refused to be drawn on specifics before this afternoon's caucus meeting. "We're not here to talk about speaker politics," he said, "but I can say you can stick a fork in Tom Craddick. It's over."