Martinez Labors While Other Dems Party

Cap Metro strike: What a bummer 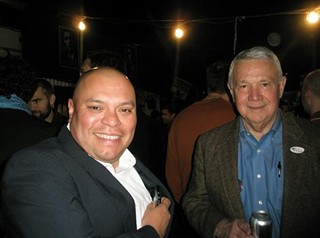 While all the other Democratics were partying, celebrating Obama's historic victory and kicking back at the Driskill Hotel last night, Council Member Mike Martinez remained serious-faced and hard at work. Trying to avert a labor strike by bus drivers and mechanics for Capital Metro, he'd check in at the parties going on downstairs, but always returned with his fiancee to his own suite – where he paced the balcony talking on his cell phone, trying to bring the union and StarTran (Cap Metro's management subsidiary) into agreement. Though the room was equipped for a party, it stayed quiet.

Earlier in the evening Martinez said hopefully, "We're only one issue away." (We're guessing it was back pay for 2007-08; Star Tran offered a $1,000 bonus, the union wants a 3% retroactive pay raise.) Looking more grim at nearly 11:30 pm, Martinez said "I am still working on it. I have until 3 am." But neither side would back down; in the end, the union indeed called a strike, announced at 3:56 am.

Especially appreciative of Martinez' efforts was Mayor Will Wynn. It was Wynn who labored long (and successfully) to avert Capital Metro's last strike. This time, he was delighted to leave the job to Martinez, especially on election night. As a celebratory Wynn leaned over a Driskill balcony after midnight, watching the spontaneous Obama victory street party break out below ("Note the restraint APD is showing!") he said, "There's a special place in heaven for Mike Martinez tonight!"

For the very latest information on the limited still-running Capital Metro routes, go to capmetro.org or call 474-1200.