Gustav: Gone, But Not Forgotten

Hurricane Ike is predicted to make landfall on the Gulf Coast later this week, and even though it looks like it's heading to Texas, Louisiana Gov. Bobby Jindal has already declared a state of emergency.

But it's important to remember that, just because it didn't hit New Orleans as bady as anyone feared, it doesn't mean the damage from Hurricane Gustav is all cleared up. Louisiana electricity firm Entergy reports that, as of 11am this morning, 206,080 customers across the state still had no power, and some face outages until October. The Associated Press reports that demand for food and water was much higher than anticipated and Jindal has criticized (surprise, surprise) FEMA for not getting essential trucks into the region. The Red Cross is still running shelters and handing out ice in areas of New Orleans.

Along the coast in Houma, which took the worst of the battering from Gustav, residents are still under an 8pm-6am curfew. It also looks the ubiquitous blue tarps will be back again.

Gustav Cannot Become a Photo Op
Why the incoming hurricane doesn't change anything about the administration.

Austin Responds to Gustav
Gustav is still miles from the coast, but Austin's relief efforts are already kicking in. 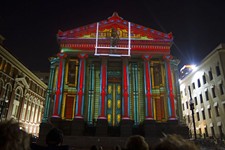