Every Day Is Halloween

Mr. Creep of the House of Torment: "You like me, you really like me!" (Photo by Richard Whittaker)

Everybody has that one thing that sets their spine on edge and their teeth chattering: For owners of Halloween haunted house attractions it's not snakes or zombies or ghouls, it's waiting for the announcement of the Top 13 Professional Haunted Attractions contest, the Oscars of the haunted attraction world. When the 2008 winners were announced on Wednesday, Austin's own House of Torment (which opens for its fourth year at its current Highland Mall site on Sept. 19) catapulted in at number 6, pushing past legendary haunts like Philly's Bates Motel and NoLa's House of Shock. House of Torment vice-president John Love explained, "We've been hoping we were on the list. They review hundreds of haunted houses, and we submitted our materials because we thought we were doing something really special. Thankfully, our peers saw it that way."

Halloween is a $6 billion-a-year industry (second only in gross revenue to Christmas in non-travel spending), with major industry gatherings, a trade body (the Haunted House Association) and its own trade journal, HauntWorld, which hands out the awards. "Every house that's on that list puts on big shows," said Love, "and this is the first year we've really exploded on the national scene."

See full list below the jump. If you dare! 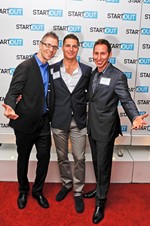