Will the Real U.S. Senate Race Please Stand Up?

Polls are up and down, but all seem to favor Cornyn 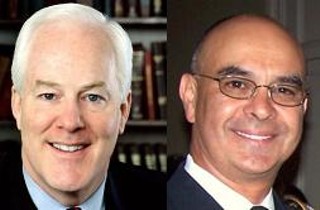 If anything would make you question the science of polling, it would be the Cornyn vs. Noriega race. One week, the campaign of Democrat Rick Noriega optimistically points to a poll purportedly showing the incumbency of Republican John Cornyn in trouble; the next, Cornyn’s camp triumphantly points to another poll showing a safe lead over his challenger. (Libertarian Yvonne Adams Schick will also be on the ballot.)

On Aug. 9, the Government Department and the Texas Politics project of the University of Texas published a July 18-30 poll of 800 registered voters showing Cornyn with a lead of 44% to 31%. But numbers have bounced around all summer, sometimes within the same pollster – Rasmussen Reports pegged Cornyn’s lead at a scary (for Cornyn) 4 points in early May, but it bounced up to a comfortable 17 in early June. Rasmussen’s most recent numbers have Cornyn with a 47%-37% edge. Among other opinion measurers, Republican pollster Mike Baselice put Cornyn’s lead at 16 points back in May, while the Texas Lyceum put it at only two points in June and Research 2000 said 4 points in May.

Our instinct says Cornyn is currently enjoying a comfortable, if not insurmountable, lead. Treat it like the Olympics judging and throw out the high and low scores, and his average lead among the major polls this year is 10 points.

One thing is clear – if Democrats hope to capture a statewide office or the legislature, the iron is hot right now. The UT poll says 67% of Texans think the nation is on the wrong track and 81% believe the U.S. is worse off than a year ago. Some of the most surprising numbers: In the state that foisted George W. Bush upon the world, a slim majority (50.1%) now have a negative impression of the president, and although 39% identified themselves as conservative and only 20% said they were liberal, 41% said they more or less considered themselves Democrat, compared with 38% who swayed Republican.