Jones and the Green Economy 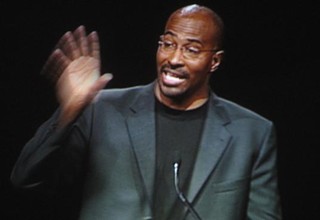 Jones: "We will invest and invent our way out of this crisis." (Photo by Richard Whittaker)

His may have been one of the worst-attended keynotes of the whole Netroots Nation event, but Van Jones had an excuse for turning up on Sunday morning for a convention that started on Thursday. He was flying back from Antarctica.

The president of Green for All was pretty much taking no prisoners and leaving no ally behind. He was quick to support the core idea of Al Gore's latest challenge for all-renewable electric production in 10 years because of one reason: It does solve a whole host of problems. "What our next president should say is I'm going to unleash a WWII crash program to weatherize and solarize every house in this nation," he said.

The mass investment in education and jobs that would come from just a serious push for solar power could rehabilitate the U.S. economy. As Gore pointed out on Saturday, it's a financial no-brainer: Due to economies of scale, wind and solar energy actually decreases in cost with demand, while oil only gets more expensive)

The problem, Jones said, was the paradigm shift it required. He argued America needed to take the ideas of Jimmy Carter when it came to energy efficiency and international diplomacy, but apply them with the broad-coalition, all-inclusive power of the Roosevelt New Deal Coalition.

What progressives have to do, he rammed home, is move from the ideals of opposition to the ideas of governance. The conservative right, he argued, will mobilize fast once in opposition: If Democrats and progressives can't show the economic, social and national security benefits of mass greencollar jobs, the GOP will sweep them away with a simple mantra of cheap oil. That wouldn't just mean "We cannot drill and burn our way out of this crisis," he said, "Because we will bake this planet."

For conferees that were too tired, too hung-over, or too stuck on a plane home to catch his speech, fear not. All keynote speeches and panels will be available in a couple of weeks at the Netroots Nation website.

SoapBlox Crumbles
Backbone of the Netroots Nation gets hacked

Stylin' and Profilin' at Netroots
Chronicle news staff invited to GQ party at Netroots. Yes, we were surprised too.