Where does the former Bush spokesman fit into the history of the office? 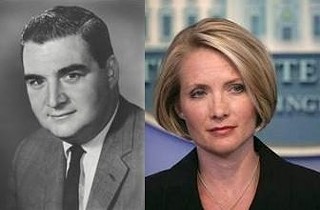 From Salinger to Perino: How times change.

Former White House Press Secretary Scott McClellan (who is at Book People today signing his autobiography What Happened; read our full interview here) told the Chronicle that any future press secretary should ask themselves one question: 'Will I be able to attend any meeting I choose to at any time I choose to attend?" If that sounds far-reaching for a flack, quick history lesson. That's what the job used to be.

In his autobiography, With Kennedy, JFK's press secretary Pierre Salinger recounts how he was not just a guy reading press statements. He was the point guy for explaining policy. That meant that, in 1962, when the White House sent someone to talk to the Russians about information exchange, they sent Salinger, and he was so trusted that he talked directly with Communist Party First Secretary Nikita Kruschev. It was during their walk around his dacha that Salinger found out for Kennedy that Kruschev was trying to reform the Communist Party and the Politburo.

Compare that to Nixon's press guy, Ron Ziegler, who won media immortality when Tricky Dicky famously (and literally) shoved him at the press corps in New Orleans.

The White House press secretary has gone from information expert to human shield. And don't expect any other Bush spokesperson, current or former, to change that. As long-time Bush-watcher Jim Moore said, "(Tony) Snow and (Ari) Fleischer, they're defending their own belief system, and I don't think that was true with Scott and Dana (Perino). But Dana is more of an empty vessel and a cypher than Scott was."