Morrison Breaks on Through to Run-Off

Morrsion celebrates inclusion in run-off with Galindo; this is the end for other Place 4 hopefuls 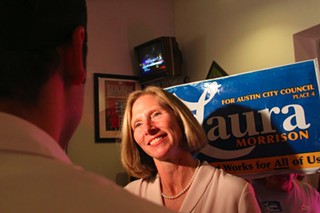 Running around like a madman on election night – for City Hall Hustle, natch; check out our E-Night party blowout this Thursday – meant yours truly couldn't share his election night thoughts. So here's a sketch of where the most action was in Place 4: Laura Morrison's gathering at the Waterloo Ice House, a raucous returns-watching party which quickly turned into a victory celebration.

Early voting returns Morrison a commanding lead of 37% in the six-person field, which held all night – ultimately swelling to 12,882 of Place 4's 33,398 votes, ensuring her a spot in the June 14 run-off opposite Cid Galindo. News 8 Austin aired a live interview with Morrison, causing her supporters – members of Better Austin Today (Jeff Jack, Debbie Russell, among others – wonder how many BATPACers made it to Jason Meeker's party?), Liveable City (Mark Yznaga, Susan Moffat), and Save Our Springs' Bill Bunch (standing only inches away from development attorney nonpareil and Snidely Whiplash to the neighborhood set, Richard Suttle) – to vigorously scream and wave placards behind their candidate. Someone yelled, "Cid said no to neighborhoods!"

Taking the stage shortly thereafter, Morrison thanked her supporters and advisors (specifically Yznaga, Jeff Smith, and David Butts) before addressing the campaign. "We got a lot of votes today," said Morrison. Noting the campaign had included "a lot of ups and downs," she nevertheless vowed "we can do it for another month if we need to – and it looks like we need to!"

This Thursday's print edition of the Chron will have the rest of the Place 4 roundup, along with as much election news as you can handle.