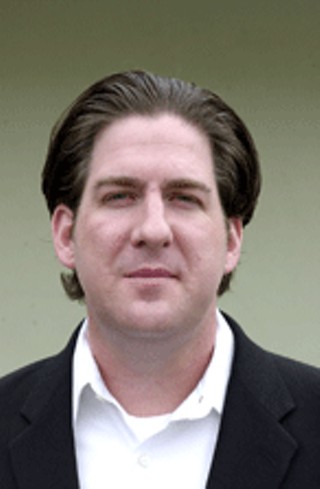 “I’ve seen and produced a whole lot of political advertising,” Blizzard said in a press release, “and I’ve never seen such a blatant violation. When it happened a second time I decided if no one else was going to file a complaint, then I needed to.”

The complaint centers around two main points: First, the original ad appeared to be a part of an ad for Discount Electronics, which Culleton owns. Blizzard says that would violate the state law forbidding corporate contributions to political candidates. Chronicle advertising director Carol Flagg says that although the ad was originally booked under Discount Electronics, Culleton later established a separate, personal account to pay for the portion of the ad dealing with the Place 1 race.

After the original ad ran, Meeker said the ad was placed without his knowledge and after Culleton had left his campaign, and he had no involvement in it. Blizzard disputes that contention, writing, “It’s hard to imagine this wasn’t coordinated, when Culleton was Meeker’s treasurer up until the day [March 26] before the ad was due at the Chronicle. As treasurer he is a representative of Meeker’s campaign, so unless he thought this up, wrote it, somehow got campaign pictures, laid it out and submitted it all after 4:55PM that Wed., then he was coordinating with the campaign and it’s a corporate contribution. Even if he did do it after departing the campaign, it’s hard to believe the timing of all this is just a coincidence.” (Actually, says Chronicle publisher Nick Barbaro, camera-ready ads such as the one in question have a Monday deadline, which for this ad would have been March 31.)

[UPDATE: After this blog entry was posted, Meeker sent an e-mail saying: "I asked Allan McMurtry to be my new treasurer on Wednesday, March 19th. The paperwork was submitted days later when I was down at City Hall and returning another one of the other campaign filings."]

"I am taking on the City Hall insiders, and lobbyists like Mike Blizzard, who in the past has worked for a law firm that represented Lincoln Properties, are fighting back dirty with charges that don't hold up,” Meeker replied in a written statement. “They're funding Leffingwell's campaign, so I am not surprised that a lobbyist has made unfounded charges against me. I'm standing up for the people and against the insiders. When you attack the puppet, the puppet masters get a little upset. Leffingwell still needs to give back the Wal-Mart/Lincoln Property money that he took during the RG4N vs. City of Austin/Lincoln Property trial.”

Meeker is the former spokesman for Responsible Growth for Northcross, a group that sued the city and Lincoln Property over plans by the latter to build a Wal-Mart on the former Northcross Mall property. He has criticized Leffingwell for taking campaign donations from lawyers with Armbrust & Brown, which represented Lincoln. Leffingwell also received a donation from Casey Dobson, lead counsel for the city in that trial. See the upcoming (April 18) issue of the Chronicle for analysis of campaign contributions in this year's City Council races.

Blizzard says he is a supporter of Leffingwell but has no involvement in his campaign. Blizzard also notes that he is no longer officially registered with city as a lobbyist, even though the city Web site still lists him. The site says his lobbyist credentials expired on April 6.

“I really don’t know how to respond – I think we’ve handled the problems,” Culleton said, noting the two separate accounts he created. “I’ll make whatever changes need to be made. If we’re still not doing it up to whatever the regulations are, I’ll make additional changes. As far as them wanting to fine me … if I’ve got to pay for my First Amendment right, I’ll write the check.

“It’s billed separately,” Culleton added. “I’m not out there to break any rules. I guess I probably owe everyone an apology for my ignorance in the beginning, but I didn’t even realize there was any type of regulation when it was me or my company paying for any of these, and I’ve learned a little bit about that along the way.

As for coordinating the ad with Meeker, Culleton replied, “Not only have I not coordinated anything with Jason or his people … I’ve only met Jason three or four times in my life. I didn’t even know him before this RG4N fiasco started.” Culleton says that after Meeker asked him to be treasurer, he missed a press conference, and then Meeker decided that perhaps Culleton was too busy to work the campaign and asked him to step down. “Those are the only two conversations we’ve had. I never really was [his campaign treasurer]. I never acted as his campaign treasurer at all.”

Allen Demling is also in the Place 1 race. Municipal elections are May 10, with early voting running April 28-May 6.

Below is the text of Blizzard's complaint, with hypertext links to the portions of the Texas Election Code that he alleges were violated:

In the past two weeks two separate advertisements for Discount Electronics have been published in The Austin Chronicle, a weekly print publication in Austin, Texas. Discount Electronics is a dba (File # 15634600) for First E-Commerce, a Texas For-Profit Corporation (File #0156354600). These ads also include language and photos that expressly advocate the election of Jason Meeker, a candidate for Austin City Council. The ads include the words “Vote for Jason Meeker.”

The entire ad placed in the 4/4/08 edition of The Austin Chronicle (copy attached to complaint) appears to have paid for by First E-Commerce dba Discount Electronics. This is confirmed by a news report in In Fact Daily on 4/5/08 (also attached). If true, this ad is a corporate expenditure that violates Section 253.094 of the Texas Election Code, which prohibits corporate contributions or expenditures on behalf of a candidate. An offense under this section is a felony.

According to a “Rate Card” (attached) provided by The Austin Chronicle, for an ad to have appeared in the 4/4/08 edition payment and ad copy were due by 5PM Thursday, 3/27/08. This means that unless Mr. Culleton conceived, wrote, procured photographs, laid out and submitted the ad all after 4:55 PM Wed., 3/26/08, then he was Treasurer of the Jason Meeker campaign while producing this advertisement. This would be clear evidence of coordination and as such would be considered a corporate contribution to the Jason Meeker campaign. If true, this is another violation of Section 253.094 of the Texas Election Code, which prohibits corporate contributions or expenditures on behalf of candidate campaigns. Again, an offense under this section is a felony.

If true, this also would be a violation by the Jason Meeker campaign of Section 253.003, which prohibits a candidate from accepting a contribution from a corporation. Violation of this section is a Class A misdemeanor.

The ad in the 4/4/08 edition of The Austin Chronicle also contains no disclosure that it is political advertising and it does not include the required disclaimer “Paid for by _________,“ a violation of Section 255.001 of the Texas Election Code. A person who violates this section is liable to the state for a civil penalty not to exceeded $4,000.

The advertising expenditure was not reported as a political expenditure to either the Austin City Clerk or the Texas Ethics Commission in a 30 day pre-election report due on 4/10/08. This activity was also not reported by the Jason Meeker Campaign as either a contribution or a direct expenditure made on its behalf on its Candidate/Officeholder Campaign Finance Report filed with the Austin City Clerk on 4/10/08. This appears to be a violation of Section 253.062 of the Texas Election Code, which requires the reporting of political expenditures that exceed $100, by First E-Commerce dba Discount Electronics and a violation of Section 254.031, which requires the reporting of direct expenditures in support of a candidate, by the Jason Meeker campaign.

A second similar ad (attached) was published in the 4/11/08 edition of The Austin Chronicle. The ad again includes the words “Vote for Jason Meeker.” The portion of the ad including this advocacy also includes, in a miniscule typeface, the words “Ad paid for by Rick Culleton” but does not state that it is “political advertising.” This is another violation of Section 255.001 of the Texas Election Code.

It is also not clear that this ad is truly separate from the corporate advertising below. If Mr. Culleton simply paid for a pro rata share of the corporate ad, the corporation would still be paying for a portion of the political expenditure because a pro rate share of a full-page ad is much less than the cost of a separate 1/8 page ad (see attached Rate Card). A separate 1/8 page ad would also incur a “placement fee” (see Rate Card) to be placed in such a specific position.

If Mr. Culleton did not pay for a separate ad and the required placement fee then First E-Commerce dba Discount Electronics again violated Section 253.0094 by making a corporate expenditure, an additional felony offense. If the Jason Meeker campaign in any way coordinated w/Mr. Culleton or First E-Commerce dba Discount Electronics on this ad, then he again violated Section 253.003, which prohibits accepting a contribution from a corporation. Violation of this section is a Class A misdemeanor.