Not only does Texas produce more wind power than any other state in the U.S., but Texas increased its wind power capacity in 2007 by 59%, more than twice as much as any other state, installing nearly $3 billion worth of windmills and hardware, reports the American Wind Energy Association. Texas’ wind farms represent 26% of the nation’s overall wind power capacity, and that 4,356 Megawatts of energy is enough to power 1 million Texas homes.

AWEA says plans to add new transmission lines are set to be finalized by state regulators this year, which will help facilitate the 3,064 MW of new wind farm plans made during 2007, but that extensions of federal production tax credits, dropped out of the recent energy bill during partisan wrangling, are desperately needed to sustain growth. New and existing wind projects could reduce wholesale power costs by more than $1 billion per year while reducing statewide power plant emissions by 5%, AWEA says. (See www.awea.org for more.) 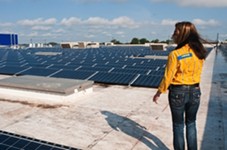