The decision came after council picked the matter back up in today's executive session, after being unable to reach consensus during their specially called meeting yesterday. It sounds as if debate over how to proceed may be responsible for the delay. Today, Council Member Jennifer Kim has made calls for a public vetting of the candidates, and it sounds like search firm Arcus agrees. Their Doug Firestone suggested a "public meet-and-greet this coming Tuesday evening" would be appropriate, "someplace with free parking." The next day, Wednesday, Jan. 16, council's still posted for additional interviews and deliberation, but it's unclear whether the city legal department's answered the question of whether they'll be able to announce their decision and hire by the council meeting the following day (Thursday, Jan. 17), due to the necessity of contract negotiations. Still, Mayor Will Wynn (whose office has led the search) optimistically opined council will "go ahead and post for potential action for that week's City Council meeting."

So, to repeat: Council picks two outside finalists, preps for meet-and-greet next week, wants to announce hire then too, but we'll see.

UPDATE: Pasted after the jump is the city's press release on its selections. And if you haven't ogled it already, here's Beside the Point's rundown of the candidates in today's print edition.

AUSTIN, Texas. (January 10, 2008) - Mayor Will Wynn announced today that he and City Council have selected the finalists for the City Manager position. The Council has named Jelynne Burley and Marc Ott as the candidates to succeed current City manager Toby Futrell.

"After two days of intensive one on one and group interviews with the seven semi-finalists we are pleased to say that these 2 outstanding candidates will move forward to the next round of interviews," said Mayor Wynn. "All of the candidates are exceptionally well qualified and it was a very difficult decision to narrow the list to these 2 finalists. On January 16th we will hold final one-on-one interviews with, and presentations by the finalists. At our January 17th City Council meeting we are hoping to take action to appoint Austin's next City manager."

There will be an opportunity for the public to meet the two finalists at an evening reception to be held on Tuesday, January 15 at Palmer Auditorium. Free parking will be available for the public at this reception. Further details as to the exact time will be forthcoming.

Provided below is an overview of the 2 finalists being considered for the City Manager position.

Ms. Burley is currently a San Antonio, Texas Deputy City Manager. Burley began her career in Public Administration as a Project Management Specialist in San Antonio in 1984. She has since moved up the ranks to a variety of different roles including: Budget/Management Analyst, Special Projects Manager, Director of Facilities Planning and Construction, and an Assistant City Manager. Ms. Burley has a Master's
degree in Urban Studies from Trinity University and her Bachelor's degree from Southern University. 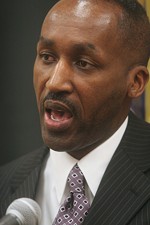