Extend Our Trail (If Not Our Sympathy)

When you can't get what you want, you should lie, distort, and take advantage of the innocent public for your own gain, right? Guess that's what they teach in developer school.

The Chronicle's most recent coverage of the controversial project proposed by developer CWS for 200/333 E. Riverside ended with the observation, "Had the site plans that CWS filed for its 17-story shoreline condo towers not presumed such greedy setback variances, been so outrageously out of scale, and been so blatantly disrespectful of WO [waterfront overlay] values, SaveTownLake.org never would have formed. Few things galvanize this town as powerfully as a developer in a black hat."

Hilariously, CWS seems to have seized on this idea – hey, a developer in a black hat! – to craft its latest misinformation campaign. CWS commissioned the e-mail blast now bouncing around town (pasted below the fold), which poses as coming from a phantom group they conjured up, Extend Our Trail. (Their minions also are calling around town with a misinformation phone surveys.) The now-desperate CWS misinformation campaign represents city council as the so-called bad guy who must be urged by citizens to grant a variance to a developer - that being CWS, of course! – as a way to "demand responsible development." Huh?

Poor CWS has resorted to posing as a bunch of liberal anti-developers. Have they no shame? Of course, nowhere does the CWS misinformation campaign admit that "the wrong option" they so aptly identify would be 100% their voluntary choice. CWS does not have to leave (or rebuild in place) the existing three-story apartment buildings close to the waterfront, for any reason at all. Except to make more money and spite the community.

We'd laugh, except it makes our stomach hurt. Read their email missive after the jump.

[NOTE: Confirmation that CWS created Extend Our Trail to conduct its own survey/petition/campaign has come from multiple sources, including a statement by CWS representative Richard Suttle at the Parks Board.]

From: Extend Our Trail 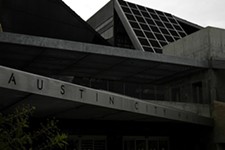 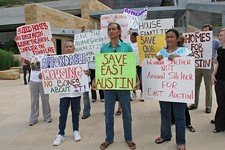 Town Lake Animal Center: The End of the Beginning of the End
Council moves closer to some resolution of the animal shelter problem, amidst furious protests.