The stalwart defenders of Barton Springs reorganize in face of court loss.

Unwelcome news, but not surprising following the Save Our Springs Alliance's recent blow in court. Here's SOS' press release:

Save Our Springs Alliance executive director Bill Bunch says, “SOS Alliance will continue to advocate in the court of public opinion and the courts for preserving our Hill Country water and wildlife for today and for future generations. This will include protecting Bee Creek, Barton Creek, and Lake Travis from the misnamed ‘Sweetwater’ development. And we need the community’s continued support to resolve this financial challenge. ”

SOS Alliance Board Member Karin Ascot, former Vice Chair of the City of Austin Environmental Board says, “We have not been afraid to challenge powerful interests that pose the greatest threat to the natural and cultural heritage of the Hill Country. At a time when governments at every level are failing to protect our most essential life support systems from even the worst kinds of development, our work is more important than ever.”

The Texas Supreme Court let stand a lower court’s ruling requiring the Alliance to pay $294,000 in attorney fees to the Lazy Nine Municipal Utility District (“MUD”), a special government district created by the Texas Legislature at the request of Austin developers Bill Gunn and Ed Horne (of Wilshire Homes) and their partner, Forest City Properties of Cleveland, Ohio.

In 2004, the developers began seeking approvals for a massive development in the Hill Country west of Austin. With thousands of homes proposed for steep hills draining into Bee Creek and Lake Travis, and sewage dispersal draining to Barton Creek, the so-called “Sweetwater” development will pollute local waterways and drastically increase traffic on a dangerous stretch of Highway 71. The planned development is next door to the notorious West Cypress Hills development, which was cited for dumping massive amounts of construction debris into nearby Lick Creek.

SOS Alliance sued the developers’ Municipal Utility District, claiming that the Legislature created the District without first providing notice to Travis County and the public as required by the Texas Constitution. SOS Alliance also claimed that the legislation delegated public, governmental powers to a private developer in violation of the state constitution.

An unelected visiting judge was appointed to hear the case, over SOS Alliance’s objection. The trial court refused to decide whether the MUD was created in violation of the Texas Constitution, instead holding that the Alliance lacked legal standing to bring the challenges and ordering the non-profit charity to pay the MUD’s attorney fees. The Sixth Court of Appeals adjusted the trial court ruling in SOS Alliance’s favor, but left the central rulings intact.

Lazy Nine MUD’s lawyers admitted at least one of the constitutional violations occurred, but the Supreme Court refused to hear the case even though it had specifically reviewed the adequacy of the constitutionally required notice when the Legislature reconfigured the Edwards Aquifer Authority in 1995.

Bunch adds, “Special districts are replicating across the state with virtually no oversight. They have become the engines of hyper-sprawl and are undermining our basic concepts of representative democracy. Most of the public and media are unaware that today, private developers are allowed to own their own government. The Dallas Morning News, in a major series, called it ‘government by developer.’ The Lazy Nine MUD is perhaps the worst example. But judicial review will have to come another time.”

“Lazy Nine MUD’s settlement offer demanded that we say and do nothing while Gunn, Wilshire Homes and Forest City build their massive project above Bee Creek and Lake Travis. But the Alliance Board was not willing to betray our mission to protect our vulnerable Hill Country watersheds. To do so would have only compounded the injustice of the courts’ refusal to exercise judicial review. We will not disappear, and our advocacy for the environment will continue,” says Board Vice Chair Kirk Mitchell.

There are more than 1,500 special districts (MUDs, water control improvement districts, etc.) in Texas created by the Legislature and the Texas Commission on Environmental Quality under Article 16, Section 59 of the Texas Constitution. Many of these districts are controlled by a single developer for years, even decades, after they are formed.

“For the Texas Supreme Court to allow these privately-controlled governments to spread like weeds across the state with no judicial oversight is a severe blow to representative democracy, the rule of law, and the Texas environment,” Bunch says.

SOS Alliance’s appellate attorney, Renea Hicks, comments, “It is not easy to pick out the worst thing about what’s happened in this case, but I’d nominate the court decision forcing a non-profit group, which has been instrumental in protecting the Hill Country and Austin from the ravages of money-driven private development, to fork over three hundred thousand dollars to cover the attorney fees of the MUD’s developers.”

Weldon Ponder, the Alliance’s bankruptcy attorney adds, "The reorganization case we have filed today in the Austin Bankruptcy Court will enable the Alliance to carry on with its important work while we seek court approval of a financial plan that will give equitable treatment to all parties having an interest in this matter. We are confident we will be able to accomplish that goal and exit the bankruptcy process in a few months with an approved plan that will be fair to everyone involved, including the judgment creditor." 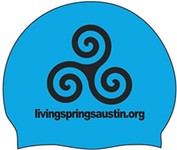 One in a Crowd: Florence and Living Springs
Barton Springs web series, plus a last ask for UT project