One Down, 30-Something to Go

Tuesday, Feb. 20, will be remembered as the day the music died in Austin. Well, maybe not the music, but the day the music-based opportunistic marketing synergy went belly up. Seems that in the dead of night, a band of thieves with no respect for the Chamber of Commerce dismantled and stole one of the 10-foot Gibson "art guitars" at Congress and 3rd Street.

Will Wynn is all torn up. "I'm really disappointed. This is not representative of the Austin that I know. Not only are the guitars part of a hip public-art project, but more importantly, they're to raise money for some great nonprofits that are benefiting children, artists, and musicians in town." But can't we find a way to do that without being forced to appreciate a what's essentially a form of marketing as art?

All will be forgiven if the piece is returned by 5pm today, said a Gibson representative. Otherwise, "We will continue to work with the mayor's office and the police force to bring these thieves to justice and prosecute them to the fullest extent of the law."

UPDATE: The Statesman's unbelievably monikered "All Ablog Austin" is reporting the statute made it as far as around the corner:

"An Austin Guitartown sculpture that was believed to be stolen has been found less than a block from its now-vacant display stand in an entryway of a nearby building.

Kyoto Japanese Restaurant sushi chef Scott Lorfing said he first noticed the 10-foot guitar sculpture in the entryway leading to the restaurant on Monday and didn’t realize anyone thought it had been stolen until he watched the television news this morning."

It has come to my attention that there have been various news items regarding a "stolen" 10 foot Gibson guitar at 315 Congress Avenue, in front of the Elephant Room.

Short version: It was I (and another Elephant Room customer)

On Sunday night, I went to the Elephant Room (something I do frequently) to see the Kim Kimura quintet. I didn't get there until around midnight. The band was on break, and Kim Kimura was outside smoking when I arrived. I noticed the guitar sitting on the ground next to its stand and remarked to him about it. There was some joking speculation that some Fender fans had sabotaged the piece of artwork.

In reality, it looked to me like something innocent had simply knocked the guitar off its inadequately designed mount.

Anyway, I went downstairs (the Elephant Room is downstairs in the basement below Kyoto) and mentioned the guitar to Rebecca, the bartender, and another customer and I decided that the best recourse was to bring the guitar inside for safekeeping so nobody would make off with it.

The original plan was to bring it down to the Elephant Room, but because of the stairs, we decided to leave it at the top of the stairs instead.

Tonight, I went to the Elephant Room to see the Kat's Meow. After they were finished, I went to the bar to visit with Robin Flowers, and J.P., one of the owners, approached me, asking me for my name and phone number.

Apparently, Gibson Guitars has put out a reward for the return of the guitar, no questions asked, and someone from Kyoto has claimed responsibility for recovering it. I can say emphatically that is not the truth, since I was one of two people who recovered it.

I'm actually curious to know what caused the guitar to come off its mount. There's some speculation it was marathoners who knocked it off its mount. That may be true. I think it's also just as likely that the wind blew it off.

I took some time to inspect the mount, and I have to say that whoever engineered the mount needs to take a second look. The mount points are far from adequate to support a ten foot guitar. Considering the guitar was sitting unencumbered on the sidewalk, I'm fairly confident it was an accident.

There was a casualty. The neck of the guitar broke.

I've notified a couple of news stations and the Chronicle of my version of the story, but I thought I'd mention it here in case they distort the information.

And, if anyone has links to articles on this news item, please forward them to me. Thanks. 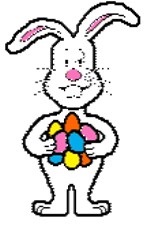 Don't Drop the Eggs
Have we really come to this? 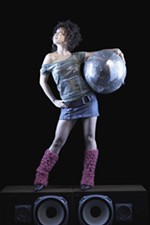