On Wednesday, November 29 at 7pm, at the Galaxy Highland Theatre, 6700 Middle Fiskville (the shopping center northeast of Highland Mall, across the street from Lincoln Village), People For the American Way will be screening the documentary Shut Up & Sing, which details the education that country music superstars the Dixie Chicks got on the limits of free speech in wartime America. The press release from PFAW sums it up succinctly enough that we'll just reprint it here:

You may remember back in 2003 when, in the build-up to the invasion of Iraq, Dixie Chicks singer Natalie Maines made the comment on a London stage that they “were ashamed” of the fact the president hails from their home state of Texas. The aftermath was like something out of the McCarthy era.

The top-selling female recording artists of all time became the target of a boycott, as they were tarred and feathered by right-wing TV and radio personalities and conservatives within the country music industry. But in the face of smears on their patriotism and the serious financial impact of declining sales, the Chicks stood strong by their First Amendment rights and their opposition to policies of the Bush administration.

Shut Up & Sing tells their story. The new documentary by award-winning filmmakers Barbara Kopple and Cecilia Peck covers an episode in recent American history in which the Far Right tried to punish free expression and send the message to media figures and entertainers that they better "get in line" with the Bush administration’s agenda, or else suffer the wrath of their vast grassroots and media echo-chamber. It also tells the story of the Dixie Chicks’ perseverance against the right-wing attack machine.

People For the American Way invites you to a special screening of this important and entertaining documentary.

Where: Galaxy Highland Theatre
6700 Middle Fiskville (At the intersection of North I-35)
Austin, TX

Tickets are $10. If you are not a member already, the price of admission will also get you full membership with People For the American Way, one of our nation’s foremost progressive advocates for civil liberties.

Tickets will go fast and will be held on a first come, first serve basis… so please act fast! You’ll enjoy the documentary and help support People For the American Way. 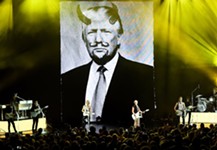