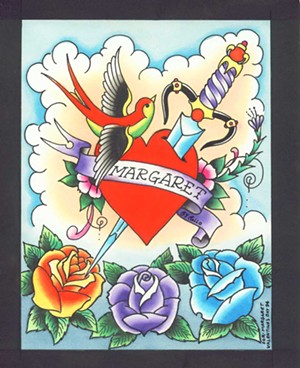 Saying Goodbye to the Ex
I have been extraordinarily fortunate in my life to love and be loved by some remarkably talented men. Last week, I had to say farewell to one of them.

Mike Malone, better known to Austin as Rollo Banks, killed himself in Chicago on April 16 at age 64. A world-class tattoo artist with a rough, inked-up exterior and a soft, liquid heart, Rollo left on this Earth an indelible imprint. Certainly he did on me. From the moment Michael Corcoran introduced us, my life changed in ways sometimes subtle and sometimes fast.

Rollo and I were married Dec. 4, 1984, less than three months after our first date. We stayed married for 15 years and with the exception of a couple of periods of estrangement in the mid-Nineties and around the divorce, we remained very close. For the last few years, I’d been editing his “Tattoo Tales,” a series of stories from his 30-plus years in the business being printed in a popular tattoo magazine. I knew these stories backward and forward, so it was a pleasure to edit them.

Sometime in 1994, I was talking to him about Nirvana. Kurt Cobain had offed himself not long before, and I was trying to explain to Rollo why Nirvana mattered. Rollo wasn’t having any of it. After listening to me go on for a bit, Rollo looked perplexed.

“Maybe we should stop making new records for a while. So we can hear all the music that’s out there that’s not getting listened to because there’s too much of it.”

It was an interesting, unlikely suggestion. I laughed, but the conversation stuck with me. 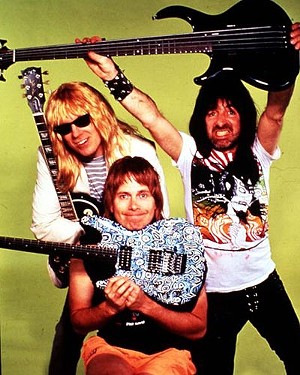 Hell Freezes Over
Well, it will eventually. Spinal Tap's allegedly reuniting to play the London stage of Al Gore's multicontinent Live Earth festival on July 7. Billed as "concerts for a climate in crisis," the fest also hosts Madonna, the Police, and Bon Jovi. For the occasion, the Tap will debut new single "Warmer Than Hell."
This Is Spinal Tap director Rob Reiner also has a new short documentary about the reunion, which shows how the band has embraced climate change. Big Boned
It's been way too long since I thought about Fishbone.

The Los Angeles-based punk/ska/soul outfit plays Emo's Wednesday with Lick Lick and Opposite Day in support of Still Stuck in Your Throat (Sound in Color), their first new stateside album in seven years. Aside from helping pave the way for the Red Hot Chili Peppers, Jane’s Addiction, and No Doubt, they were one of the best live bands of the Eighties. Anyone who saw them plow through "Party at Ground Zero" or "Lyin' Ass Bitch" during their heyday can testify to that.

Fishbone's sweat-soaked August 1987 show at the Ritz with the True Believers and Bad Mutha Goose may have actually saved my life after being shown the dorm-room door by an unrequited summer-school crush. I also recall a 1989 show at the Texas Union Ballroom with Thelonious Monster at which the band stated they'd never play UT again until the university divested from apartheid South Africa (a promise they kept).

The 'Bone's commercial peak was 1991's The Reality of My Surroundings, but even that sprawling album never made the Top 10. Diminishing returns followed and original members started dropping off. Today only sax player/vocalist Angelo Moore and bassist/vocalist John Norwood Fisher remain from the original 1979 lineup.

At its finer points, Throat recalls the frenetic, stereotype-smashing fusion of “black” and “white” musical genres that made Fishbone’s 1985 debut EP so revolutionary. From the hardcore neurosis of "Frey'd Fuckin' Nerve Endings" to the goofyass ska hoedown, "Party With Saddam," the band retains its boiled-over melting-pot vibe. While hearing them pay tribute to the influenced with a cover of Sublime's obnoxious "Date Rape" is sort of sad; it's the last song and easy enough to skip. Either way, Fishbone was always a live band. I'd never write them off in that context. 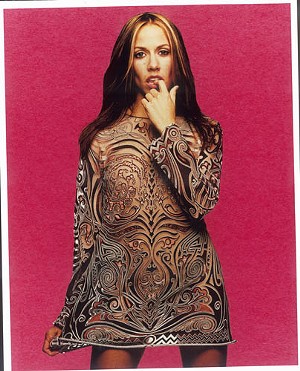 Take This Roll and Shove It
Sheryl Crow wants us to use “only one square per restroom visit” of toilet paper when we use the toilet. By “we,” I take it she means women since the only man I know who blots his weenie after peeing is David Beckham.

La Crow admits that there are “those pesky occasions where two to three could be required.” Two or three? What do you eat, Sheryl? Iams and Science Diet? As long as you’re citing exceptions, what about explosive diarrhea? Must we requisition extra? And what if you wipe and then have to go again, Sheryl? How about a long, snotty sneeze in the vicinity of the bathroom? What’s the allocation there?

I’m a little surprised that she took off after toilet paper. She mentioned paper napkins, which seems a much more reasonable place to start, since they don’t actively involve personal hygiene. The downside to using cloth napkins is that they must be washed. Washing usually involves soap, water usage, and electricity, but maybe that’s the fair trade. Clean napkins are as much a necessity to the restaurant industry as they are to household eating. She didn’t even mention disposable diapers. 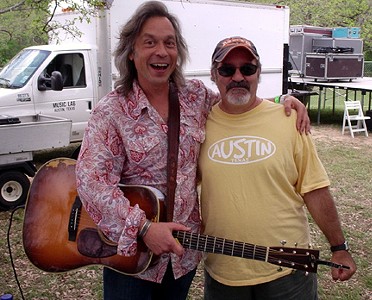 Don't Call It a Comeback
For the past couple of years, the Old Settler’s Music Festival seemed to wobble on its last legs, both creatively and in terms of attendance. This past weekend, however, it showed great signs of life with respectable crowds; a full, lively campground; and some inspired bookings that proved it’s more than just another (dreaded) bluegrass festival.

The vibe at Camp Ben McCulloch on Thursday night was as pleasant as an Austin music event could be with smiles all around and everyone kicking off their shoes for dancing and hula hoops. Slaid Cleaves cleared the air as to how a singer-songwriter goes about entertaining an audience. Backed by a trio that included striking fiddler Eleanor Whitmore, Cleaves laid down a set of country and folk, fast-paced yet touching and peppered with the occasional yodel. Baton Rouge, La.’s Red Stick Ramblers followed with a plate of swing, blues, and Cajun that had nearly everyone shaking their moneymaker. They’ve had some personnel changes over the years, which has unfortunately led the quintet to lean a little heavy on the swing and away from their Louisiana roots, but there were no complaints from the crowd, which was obviously geared up for a energetic weekend. 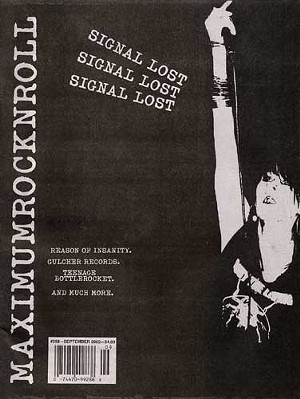 Cute Band Alert!
Above the sea of neck tattoos and back patches, I can only see Signal Lost singer Ashley Marshall pop up and down. So often, in fact, I begin to wonder if there's a trampoline I can't see. Signal Lost has lots of fans. Besides maybe Hermosa Beach in 1981, Room 710 is pretty much the perfect place for Signal Lost to play. Energetic, anthemic, all those things you like from punk rock, right?

The 4-year-old quartet is on Prank Records, once home to Kylesa and personal Schadenfreude favorite Guyana Punch Line, but they don’t sound like a typical Prank band. Instead of blast beats or unintelligible screams, they run through pop, thrash, and punk, and count bands like J Church, Severed Head of State, Deaththreat, Balance of Terror, and Storm the Tower among the branches of their family tree. Marshall's vocal range veers from a gruff howl to a Siouxsie-esque bellow and their politi-punk leanings could throw them in the pit with the anarcho ranks of Crass Records. But there's something distinctly Texas about them.

Prosthetic Screams is their latest LP. Produced by the ubiquitous Chris "Frenchie" Smith, there's a definite sheen to the new songs, as opposed to 2005's Children of the Wasteland. Funny enough, perhaps because there are two women in the band (Marshall and bassist Jasmine Mayberry) under the "sounds like" category on their MySpace is the phrase “Your girlfriend would like it.”

“That’s kinda just an inside joke from our European tour,” Marshall explains. “We played with a lot of hardcore type bands, and after we'd finish our set each night, older punks would walk up to us and say things like, ‘I like you guys. It’s different and I can dance to it.’ I'm pretty sure that on our last tour I was approached by a different guy each night who said something along the lines of, 'My girlfriend really likes you!’ I couldn’t help but wonder, where are all these girlfriends?”

Didn't seem to be a problem last night. Signal Lost heads out on a West Coast tour next week, and the play list for the van is quite telling. “Every time we cram into that van, we listen to the same tapes,” Marshall laughs. “It wouldn’t be a Signal Lost tour without Zounds, Wipers, Leatherface, Big Boys, Post Regiment, La Fraction, the Mob. And when things get tense we can always depend on some Dead Milkmen to lighten the mood.” 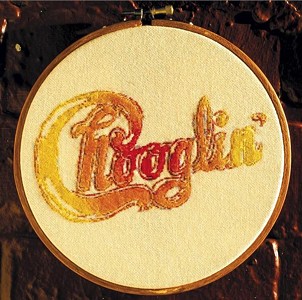 Choogle x 2
If you're looking for a condensed history of "choogle," head over to TCBlog.
In the meantime, Minneapolis quartet Chooglin', who rocked Beerland shortly before South by Southwest, take the name seriously on their latest self-titled.

Armed with a Creedence-coined moniker and a logo nicked from Chicago (might wanna lawyer up on that count, boys), Chooglin' blasts far beyond whatever notions those two weapons might confer. The fourpiece utilizes garage-borne punk fury to remind us of the ass-shaking salvation once offered by the boogie-down guitar rock of the Seventies before it got all bloated on deli trays and cocaine.

Ex-Midnight Evils Jesse Tomlinson and Brian Vanderwerf conjure up double-barreled guitar pyrotechnics while drummer Shawn Walker splays himself every which way at a hundred miles an hour without losing time. Opener "So Stupid" spins itself into a frenzy approximating a speed-of-sound collision between Muddy Waters, Foghat, and the Streetwalkin' Cheetahs. Breakneck soul workout "Do It to It" and a well-placed cover of Roy Head's "Treat Her Right" garner extra oomph from the Horns of Eleganza's barroom brass. Theirs is the sound of workaday shackles rapidly evaporating into a rank steam of spilled beer and hormones. 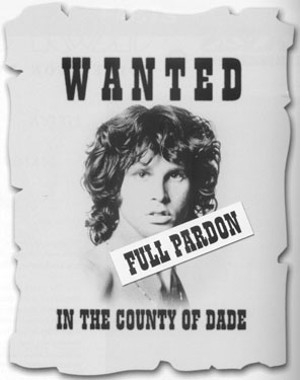 Bootleg recordings of the Miami show demonstrate Morrison’s drunken, foul-mouthed invective, but the exposure charge has always been a matter of conjecture because accounts vary and no photographs of the unsheathed tool are known to exist. Doors keyboardist Ray Manzarek has long maintained that Morrison was merely taunting the audience and never whipped anything out.

Morrison, a Florida native, was sentenced to six months of hard labor by a Dade County judge in September 1970, but he remained free on appeal. The case was still pending when Morrison died of an overdose in a Paris bathtub on July 3, 1971.

"He died when he was 27,” Crist notes. “That's really a kid, when you think about it, and obviously he was having some challenges."

Crist does not have the authority to pardon Morrison on his own. Two of the three other members of the Florida cabinet, which serves as the state’s clemency board, would also have to agree to a pardon. Moreover, Florida does not have a procedure for pardoning the dead.

Still, between this and his politically brave effort to restore the voting rights of most Florida felons once they are released from prison, Charlie Crist deserves to be short-listed for the title of coolest Republican governor.