Cute Band Alert!
When I took a jaded, cynical out-of-town friend to see the Carrots at Cheapo Discs during SXSW, his eyes lit up for the first time all week: "A lot of bands are trying to do this, but they're really doing it," he said.

"This" is Sixties girl-group pop, complete with melodies, hand claps, songs about dead teenagers, and matching outfits. The harmonies are surprisingly good, made even more impressive by the fact that three Carrots are in the scream/thrash quartet Finally Punk.

When they're not re-enacting a graphic Care Bear cannibal play or finding God, the six Carrots - also counting members of Yellow Fever and the Old-Timerz - climb the genre ably, flawlessly covering the Shangri-Las and nearly sounding better. So why girl-group songs? Their longtime manager, Jimmy Don Kray, spoke on their behalf:

“A) They are amazing pop masterpieces. B) They are fun to perform. C) For the most part they are not sacrilegious, at least to Christians. D) The world is full of boy-group songs already. E) We do not have the technology to leave the world at this point so we are trying to do something about point D.”

Swoon over the Carrots tonight at Beerland as DJ Sue turns back the clock, and pick up the debut issue of their fan-club magazine, Carrot Talk!

Farewell, Boris
Even watching Boris soundcheck during South by Southwest felt like a blessing from the southern lord. The Japanese trio, who played their only U.S. gigs at the Fest, pointed and signaled their way through each endeavor, always beckoning for more volume.

The performances were otherworldly, leaving me breathless and broke each time I rushed to the merch booth, shedding every last dollar to complete my personal Boris altar. Had I been able to conduct this interview after finally experiencing Black: Implication Flooding, their collaboration with Keiji Haino, or been able to ask follow-up questions, this would have taken on a different life. Still, via e-mail and a translator, drummer Atsuo unpacks the band’s bountiful and boundless avant-garde metal.

Into the Void: Boris takes their name from a Melvins song. How did you first get into the band and stoner rock in general?
Atsuo: I was working at a record shop around the time grunge started to become more popular. I think most bands were trying to have heaviness in their music. Among those bands, the Melvins didn’t stick to one kind of playing style; they mixed a lot of different styles, and I felt that because of that, the Melvins brought to life a world unique to each song. This changed the way I thought about music and bands. Earth 2 also changed my life. We don’t really feel that we are playing stoner rock. It might be because we listen to the same kind of music as stoner rock bands, so our sound has some similarity. We do consider ourselves a band coming out after Melvins. 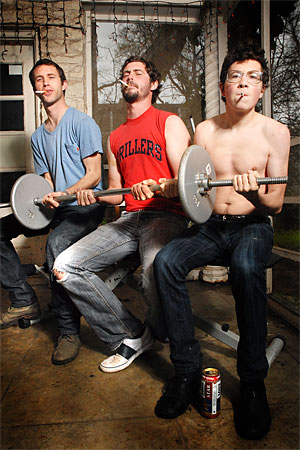 The Magic 8-Ball Says, 'Get a New Bass Player'
Going into South by Southwest every day is a lot like being a human pinball, shot into this vast maze of people texting and cars and lines, each second trying to avoid popping up right back behind that spring-loaded plunger. We all want to end up getting the jackpot, to see the band that's going to somehow change our lives. That said, perhaps the most interesting sight was the "palm reader" on Sixth Street, huddled between two buildings with a cardboard box as a table, with a line of musicians waiting. Jackpot.

Something old: Most improved goes to Jandek, whose set at the completely appropriate Central Presbyterian Church was decidedly louder and heavier than 2005, thanks in part to a more aggressive rhythm section – drummer Ian Wadley and bassist Tom Carter fell into some amazing grooves – plus local noisemaker Shawn David McMillen cranking on a harmonium. Amazingly, people were still texting during the show.

Something new: There were solid performances from 120 Days, Mika Miko, the Ponys, the Black Lips (who played the most shows of any band here; seriously, I saw them setting up behind a Whataburger Saturday night), Menomena, Under Byen, White Savage, No Age, Times New Viking, Wooden Shjips (not a typo), Noxagt, and locals White Denim, whom simply everyone seemed to be talking about. "We filled in for a metal band on a Saturday night showcase," recalls drummer Josh Block. "And Sara from Krazayzay started a mosh pit that ended up with two guys we’ve never seen before getting into a bar fight during our poppiest tune. What a sight. We’ve played four shows in a week before, but not in a day."

Something borrowed: Reigning Sound's cover of Sam and Dave's "You Got Me Hummin'"; Ohio's Psychedelic Horseshit (sort of) covering Suicide's "Ghost Rider"; New York weirdo guitar and piano duo Blues Control covering … was that "My Sharona"?

A Geezer Remembers South by Southwest
By noon Thursday, the gray skies were gone, and the air carried a hint of spring. In the parking lot next to Trophy’s, there was a rudimentary stage and sound system, and it seemed like 1940 all of a sudden. The Get Up Johns had driven from St. Paul, Minn.; this was their only gig of the weekend, and they were making the most of their 30 minutes. With an acoustic guitar, mandolin, fiddle, and brotherly harmonies, Josh Wenck and Jake Hyer recalled the Louvins, Stanleys, and Delmores with a youthful skill that exuded reverence. They supposedly garnered an opening slot on an upcoming Carrie Rodriguez tour from this appearance, so maybe the long haul down I-35 was worth it.

Stopping by the Twangfest party at Jovita’s early Saturday afternoon, I was expecting an acoustic set from Columbus, Ohio’s Two Cow Garage, but the quintet was in full blare mode. It all came into focus when they asked for requests. Someone blurted out “Stranglehold,” and off they went into a guitar ramble that would have made the Nuge proud.

While everyone else was enjoying the Stooges late Saturday night, I decided to go to church. The Central Presbyterian Church on Eighth Street was an official venue, but I don’t think it had been totally prepared for Gary Lucas. First, the New York City guitarist provided a stunning solo live soundtrack to the 1920 silent film Der Golem, a German horror classic. With an incredible rack of effects pedals, Lucas proved he could make a guitar sound like almost anything on the planet.

He then led avant-punk legends Gods & Monsters through a set of noisy jazz-rock that was a welcome respite from all the folk and roots music I’d witnessed. But the big surprise was his band, which included Jerry Harrison of Talking Heads on keyboards, Billy Ficca of Television on drums, and Ernie Brooks of the Modern Lovers on bass. After Lucas introduced me to his friend, famed producer Sandy Pearlman, I walked out of that church with my mind truly blown.

About Last Night
The round of apologetic phone calls was kept to a minimum, but that doesn't mean the night wasn't a success. Saturday gave me two of the best discoveries this week. Mika Miko are five young ladies from L.A. who encapsulate everything good about rock & roll. One red telephone used as a microphone was passed around like it was a slumber party, as guitar and saxophone birthed trashy, synthy little nightmares. They were on the cover of Maximum RockNRoll recently, and I would not fuck with any of them.

Then there was Dandi Wind, a Montreal singer who is sort of a younger and slightly more unhinged Peaches. On Beauty Bar's stage, she looked like a psychedelic Olivia Newton John, bouncing all over in what looks like an ostrich coat. The energy she and her band radiated, along with the unicorn piñatas and fake eggs filled with confetti that were thrown into the crowd, added a fragrant air of manic art-school dropout to the whole Festival. She also seems like she might cut you.

Saturday's Metal Mania
As the entire music industry swarms Red River, pillaging everything in its path, Into the Void would like to lift its devil horns in honor of four local metal purveyors who punish ears year-round and who, coincidentally, all have showcases Saturday night that will leave your Sabbath blackened. I dub thee unforgiven.

Tia Carrera
10pm, Red 7
Like every good trip, the improvised instrumental jams of Tia Carrera take on a life of their own, following their metal muses (mainly the Melvins and Blue Cheer) through purple hazes laced with fleeting feats of ecstasy. Unrehearsed and unrelenting, this trio won’t stop until your mind is blown.


Giant Squid
9:30pm, Maggie Mae's
While Giant Squid may have left Red River in favor of the West Coast, the quartet continues to make waves with their debut leviathan, Metridium Field, which was released locally in 2004 and re-released late last year nationally, courtesy of the End Records. Produced by all-around metal savant Billy Anderson (Melvins, High on Fire, Neurosis), Field pulls listeners under. The recent addition of cellist Jackie Perez Gratz, formerly of Amber Asylum, adds to the submergence. 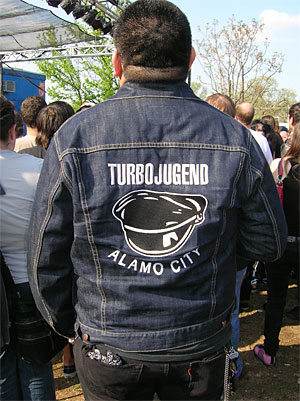 Friday Night Crash
If it's possible to only get sunburned on the back of your left arm, it's happened to me. The sun and I have a history of passive-aggressiveness, but Friday's Turbonegro day party at Victory Grill offered one sight that made it worthwhile. No, not singer Hank Von Helvete's leather man harness but a young boy who couldn't have been more than 5, clad in a Dwarves T-shirt, and singing every single word to every song. During "Good Head," he threw up the devil horns and flicked his tongue around.

A quick wrap-up of Friday's highlights:

White Denim: Why is this band so good? 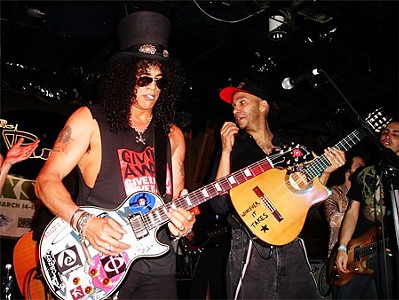 Whatever It Takes
Tom Morello may be igniting a One Man Revolution under the guise of the Nightwatchman, but he’s not against enlisting the occasional aid of his like-minded, A-list allies. Last night at the Parish, the Audioslave bookended his acoustic performance with appearances from Slash, Perry Farrell, and Wayne Kramer of the MC5, among others, using the music as a weapon to take the power back.

After a rousing introduction, the Nightwatchman quickly withdrew into the shadows of the larger-than-life figures gathered on the stage, allowing Farrell, who is launching his own star-studded Satellite Party at South by Southwest, to lead the ensemble, which included current bandmate and former Extreme shredder Nuno Bettencourt, through Jane’s Addiction’s “Mountain Song” and “Ain’t No Right,” each with a solo from Slash. Morello appeared all too happy, bouncing up and down in the background, strumming his acoustic guitar, and occasionally raising his fist in triumphant jubilation. Interestingly, it was Farrell, dolled up in a light-blue button-up shirt and black vest, who initially inspired Morello to trade his pedals for a pen.

No Man Purses
The first day of South by Southwest offered up a lot of folks in corpse paint and people with dressed-up dogs. However, nothing really sums it up like the photo here.

Anyone else notice guys in bands are now dressing like something out of Oliver Twist?