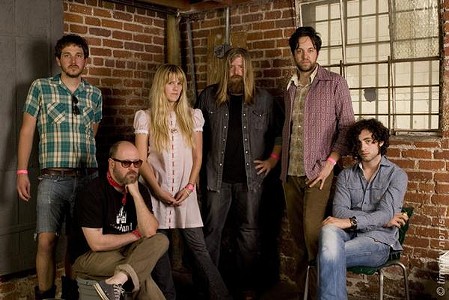 Will Courtney: Simple Man
Will Courtney was born into the music business, literally. His mother, Grammy award-winning gospel singer Cynthia Clawson, went into labor with him in a studio in Nashville, while his father, Ragan Courtney, a Baptist preacher, penned several of her hits. Raised on lovin’ spoonfuls of the Byrds and Beach Boys, Will, along with real-life sibling Lily, formed the aptly titled country-folk collective Brothers & Sisters as a reflection and extension of their roots. The group’s eponymous debut, released last year on the family label, Calla Lily Records, is rich with pastoral scenery and sun-kissed choruses that are as instantly familiar as they are welcoming. The ensemble recently recorded a new EP, which includes a cover of Neil Young’s “Albuquerque” in Los Angeles, where they recently took up a residency. Off the Record chats up Courtney after the jump. 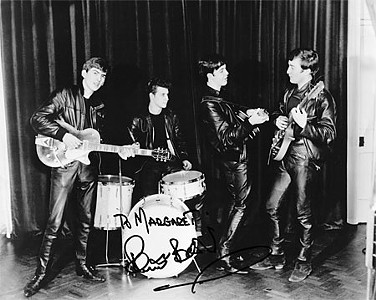 Backbeat to the Music
“Upload this to YouTube so we can watch it!” 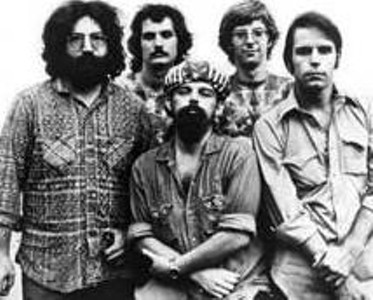 Back in to the Vault
It’s no big secret, though some haven’t figured it out, that I’m a Deadhead. No, not one of those. I went to about 20 or 30 shows from 1972 to 1994, and I still listen to a lot of their music, but I was never fanatical to the point of going on tour, collecting tapes, or digging too deep into the mythology. I was just into the music. 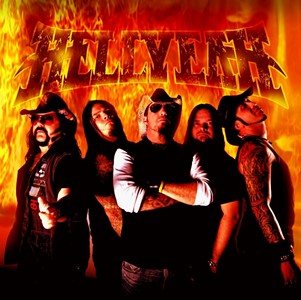 HELLYEAH: FUCKNO
In a WORLD EXCLUSIVE!, Revolver, “The World’s Loudest Rock Magazine,” announced earlier this year that the planets aligned for the creation of the “ultimate metal supergroup!” Its members? Paid staff columnist and Dallas-native Vinnie Paul (who fields hard hitting journalistic inquiries like, “If you were gay, who’s the first dude you would bone?”), Mudvayne’s Chad Gray and guitarist Greg Tribbet, previously known as Kud and Gurrg, respectively, during their masked nu-metal heyday, and some dudes from Nothingface.

The problem is that nothing about HELLYEAH (caps intentional), is, in fact, super. Gray is an even more
one-dimensional vocalist than Damageplan’s Pat Lachman, while his attempts at Texas thrash are simply laughable. It takes more than whiskey and weed to sound like a true cowboy from hell. That’s one of the reasons that Rebel Meets Rebel, the collaboration between David Allen Coe and Pantera’s rhythm section, which included the late, great Dimebag Darrell, as well as bassist Rex Brown, sounded so raw and real. Those were true musical outlaws forging an alliance at a unique crossroads. In contrast, HELLYEAH is nothing more than another forgettable Mudvayne album. After all, Matt McDonough (sPaG) is actually a pretty decent drummer. 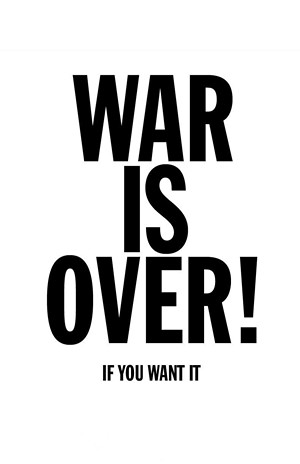 Attack Formation's Proclamation
Taking a cue from John and Yoko's ubiquitous Vietnam-era slogan, Attack Formation now has a shirt to express your views, perhaps of our current war, as seen on the right here.

"There isn't going to be any [Attack Formation] logo or our name," says frontman Ben Webster. "All the money we make off the shirts goes to make more shirts. To me, besides talking trash or joining in the apathy, not too many people in music are making an effort. I just wanted to do something that would reflect our viewpoint."

Just in time for summer! The shirts will be available at Attack Formation shows (like tomorrow's at Emo's), and if you want to reach out and touch someone, hit up wearealiveintune@hotmail.com. 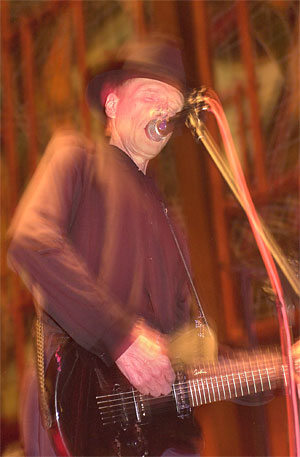 Jandek Does Fort Worth
If you missed Jandek's stellar performance during SXSW, here's another chance. Saturday, July 21, the Tall Pale One plays Fort Worth's historic Rose Marine Theater, just north of downtown. Tickets can be purchased at Good Records in Dallas, or at our own beloved End of an Ear.

And the backing band – Susan Alcorn on pedal steel and guitar, Ralph White on banjo/fiddle, Ryan Williams of the Baptist Generals on bass, and Will Johnson of Centro-Matic on drums – ain't too shabby either. Hurry! 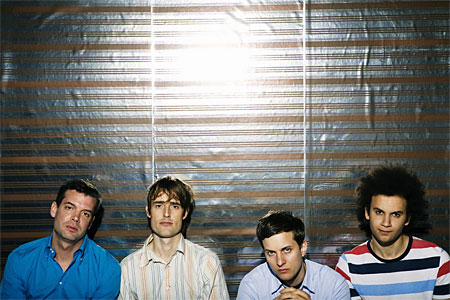 Emo's Anniversary Weekend: Another Year, Another Beer (Spilled on Your Shoes)
Friday night, Emo’s: First drink spilled on myself at roughly 10:30pm. But it was done in a rush to get away from the wankfest organized by Orthrelm guitarist Mick Barr. Dude can noodle. Later, 'round midnight, Gang Gang Dance cleansed the hippie/hipster masses with cerebral electro/rave/space waves, and a confused passerby in a “You Looked Better on MySpace” T-shirt spilled part of his drink on me. Nevertheless, GGD were engaging, if only for those in an altered state.

Geez, but what do they sound like? Well, as one friend put it, “Like Animal Collective being chased through SeaWorld by my Jamaican landlord.” At one point a guy up front tried feeling up his female companion during a tribal drum solo. Nice one. The Glorium reunion outside was a far tamer affair, save for singer Paul Streckfus whipping his mic chord around in a jaunty, lascivious manner.

Equally unclassifiable was Sunday's final anniversary show. Radio Birdman easily sold out the inside, but it was more surprising that Battles was moved outside. Halfway through "Atlas," from their excellent Warp debut Mirrored, the power went out, almost as if someone had willed it so that the whole crowd could scream the screwed sing-song beat. We stood there in the dark for a good five minutes before the power slowly returned and someone dropped their beer nearby. 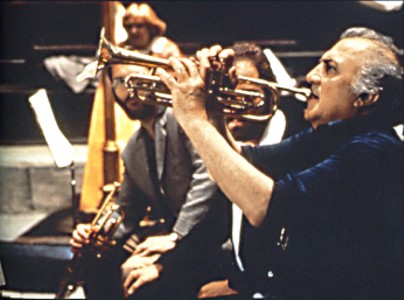 La Dolce Rota
Ennio Morricone, 78, dwarfed by a visibly bemused Clint Eastwood, nevertheless cut a monumental figure onstage at the Academy Awards in February. Receiving an honorary Oscar “for his magnificent and multifaceted contributions to the art of film music,” the Rome native’s public profile – practically speaking – lost out 40 years ago to a whistled refrain from Sergio Leone’s grimy West world. Getting a glimpse of Morricone felt like John Carpenter’s remake of The Thing, one of composer’s most compelling film scores: There he stood, in the flesh.

Morricone’s sonic alchemy endures in copious modern soundtracks, from Leone’s The Good, the Bad and the Ugly to the epic, statuette-nominated The Mission. 2005’s Ipecac-sponsored Crime and Dissonance found avant-spazzmen John Zorn and Mike Patton on the compilation tip of the maestro’s universal ear, as one ripe example. Were that Morricone’s grand precursor, Milan-born Nino Rota, Federico Fellini’s musical wingman for nearly 30 years, was equally celebrated contemporarily. The Ultimate Best of Federico Fellini & Nino Rota: Originals recently stuck its finger in the dike. 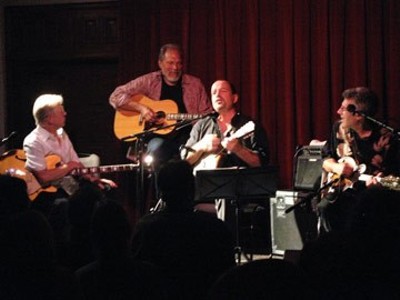 Hot Freakin' Tuna
I wasn’t planning on it. But there I was sitting next to the soundboard at the Cactus Café Tuesday night. The SRO crowd was buzzing for the second Hot Tuna show of the night.

An acoustic show usually finds them at their best, allowing the rock legends to vibrate with a singular resonance. Jack Cassidy, Jorma Kaukonen, and MVP Barry Mitterhoff didn’t disappoint with a mix of Tuna classics like “Keep Your Lamps Trimmed and Burning” and a particularly languid “Hesitation Blues,” as well as a couple of tracks from Jorma’s latest solo effort, Stars in My Crown (Red House). Mitterhoff was quite impressive on a variety of stringed things, including mandolin, tenor guitar, banjo, and bazuki, and was allowed as much space as he wanted to explore the extended hypnotic grooves. Local bluesman Steve James was called up for a boisterous take of his “Saturday Night in Jail.”

“A force of nature if there ever was one,” Kaukonen exclaimed when James left the stage and the audience hooted their approval. It was a rare chance to get thisclose to Cassidy’s eyebrows dancing along to his basslines, Kaukonen’s dusky vocals and distinguished finger picking, and ensemble play that only comes with decades of shows together. The trio delighted with an encore of “Embryonic Journey,”Jorma’s notorious contribution to the Jefferson Airplane canon, done in a kind of walking blues mode, which left the crowd buzzing a whole lot more than they were when the music began.