Austin Noise Limits
If the thought of standing, sweating, and chafing at Zilker Park this weekend is about as appealing as sticking hot forks in your eyes, the Opera House offers an alternative Friday. The venerable Jherri Zeinfeldt's Atropheed Saq, who just released its CD Dog Star Sac, a tribute to experimental filmmaker Stan Brakhage, performs, along with locals Aunt's Analog, Iron Kite, Dromez, and San Fran's Pigs in the Ground, starting at 8pm.

The Saq's going on ten years, and I recently asked drummer Lisa Cameron what it is about the collective's enduring legacy of clearing rooms:

"Two things come to mind," says Cameron. "One, the fact that we can still be considered one of Austin's enduring legacies despite not ever having learned one song and two, just as a dog returns to its vomit, so do Austin audiences return to JSAS. Hey, we may even have a statue at Town Lake or a chicken wing franchise someday."

About a Son
The soundtrack to the new movie Kurt Cobain: About a Son (Barsuk), which premieres in October, drops in stores today. Like parts of The Devil and Daniel Johnston, the film portrays the immortal musician through moving imagery set against audio recordings, based on 25 hours of never-before-heard interviews conducted by Michael Azerrad for his seminal 1993 book, Come As You Are: The Story of Nirvana.

The original score was composed by Steve Fisk, who produced Nirvana's 1989 Blew EP, and Death Cab for Cutie's Ben Gibbard, whose cover of Beat Happening’s “Indian Summer” is the only dud on an otherwise stellar mixtape, which also features the Butthole Surfers, Arlo Guthrie, Half Japanese, the Vaselines, Mudhoney, Iggy Pop, Leadbelly, and Creedence Clearwater Revival.

Cobain’s meditations on Austin’s Scratch Acid, which preface “Owner’s Lament,” provide an interesting insight into his own artistic vision:

"At that time hardcore was totally dead. Speed metal was the next big thing and I hated that shit. The reason I like Scratch Acid so much was because they had structure to their songs, real simple pop structure that you could follow real easily, and it was almost like an Aerosmith song, but it was really fucked up. And that's what I was doing and that's what I wanted to do."

ACL: The Final Countdown
Following in the steps of UK diva Amy Winehouse, Dublin-based instrumentalists Rodrigo y Gabriela have canceled the final leg of their North American tour due to Gabriela's exhaustion. Common replaces the duo on Sunday and is still scheduled to play La Zona Rosa later that night.

In other news, Bob Dylan is in fact performing at Stubb’s Saturday night. A limited number of pre-sale tickets went on sale yesterday (the password is available here). The rest are up for grabs 10am Wednesday here.

In other other news, the White Stripes have pulled out of the fest and their Sunday night gig at Stubb's citing "medical reasons." Contact 888.512.SHOW for refund info. 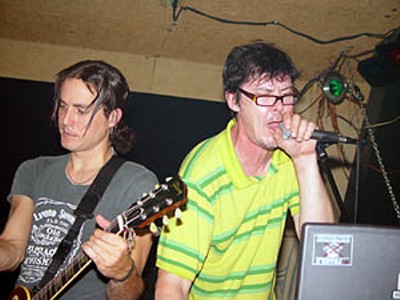 Gibby Speaks!
On Saturday, Gibby Haynes returns to Austin for the inaugural Damonfest at Trophy’s, a tribute and benefit for his close friend Damon O’Banion, who passed away earlier this year. The enigmatic Butthole Surfer is singing with O’Banion’s former hardcore outfit, the High Divers, and donating some of his artwork for a silent auction, which begins at 4pm. Off the Record caught up with Haynes recently to reminisce about O’Banion, discuss his recent happenings, the psychology of kid rock, and why he’s just not crazy enough.

Austin Chronicle: When did you first meet Damon?
Gibby Haynes: We met in the early Nineties when he was doing the magazine Thora-Zine. It was a fanzine that him and his buddies had. It’s too bad they didn’t continue on making it. They totally could have had something like Vice. They were on track to have something like that, but then it all crumpled apart like things like that do from time to time.

AC: My cousin passed down a few issues to me last Christmas. In one of them you interviewed Willie Nelson. Did he set that up?
GH: Yeah.

AC: Did you and Damon cross paths often?
GH: Dude, we got married together. We had a double wedding in Hawaii. His wife and my wife are sisters. He was one of my favorite friends and a really good guy. In the last year, it seems as if there have been many people dying. Damon was always the person to organize and to help when a situation like that arose. He’d organize benefits. We really need Damon to organize this event for him. God bless Jeff Pinkus for doing this in Austin, but Damon would have done a better job of doing this than anybody. Damon had so many friends. If he was organizing this the money would multiply by ten.

No one but me remembers Manhunter’s end credits rolling Red 7’s “Heartbeat” – as opposed to Iron Butterfly’s “In-A-Gadda-Da-Vida” at the climax – but the film’s jolted blue chill and the song’s synthetic rigor mortis have fused in my audio-visual cortex no less than “Gimme Shelter” dropping in GoodFellas. Now, Dexter has skinned “Born Free.”

The Other Janis
During the summer of 1981, I shared a big house on Baylor Street with roommates, including Alice Berry. Alice would go on to play with El Vez, Hillbilly Frankenstein, and Clouseaux before she started teaching Spanish at a Houston school but back then she was into rockabilly.

Silver Anniversary
Did I really see people "rave" dancing last night at Silver Apples? Yes. Did Simeon Coxe look like an older Garth from Wayne's World? Yes. Clad in what I hope was a white wig and black-rimmed glasses, Coxe stood alone behind his kit, sampler on one side, oscillator on the other, a screen to his right split to show what both hands were doing.

Saturday Night Legends
Down at the Saxon Pub early Saturday evening, a quartet of music veterans known as the Dead Pyrates Society payed homage to old school rock. They’re seasoned rockers, all of them – tough as iron nails and hoisting the black flag in memory of those who’ve passed, including Bucky Ballard, Keith Ferguson, and Uncle John Turner. John Staehely’s presence is enough to give them platinum credentials – he’s played guitar with Bob Dylan, Spirit, Robert Palmer, and JoJo Gunne, which also featured the booming bass of Jimmie Randall, who’s played alongside drummer Mark Hamilton for years. Add a wise-cracking Keith Richards on guitar and what more could you ask for?

Cardiovascular Blues II
“I need to shave you,” he nodded, holding up a razor.

No kidding. A thick blanket across my chest and another across the shins left me a little… exposed through the middle. He looked down at me. I looked up at him. A woman in scrubs who seemed to have no purpose in this particular operation looked over his shoulder.

By this point, I really didn’t care anymore. They’d given me a Benadryl downstairs, shot me up with a narcotic here, then given me “something to make you forget.” Can I get a prescription for that last one later?

“Both sides,” added the attendant, lowering the blade.

The femoral artery needs only be tapped on one side of the groin in a cardiac catheterization, but I was no position to argue. And who the hell was this onlooker? You can have my phone number later, lady.