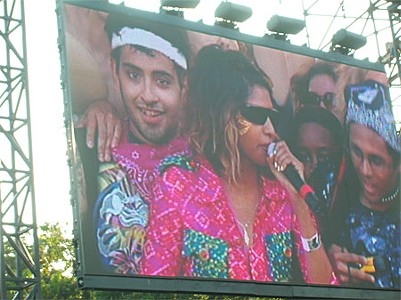 Friday’s fire apparently happened during Pete Yorn’s set, but backstage shortly afterward, two young ladies provided the above dialogue about his hair, in glassy-eyed awe of his wavy, dreamy locks. What fire? Such was the ebb and flow of ACL Friday. Peter, Bjorn & John proved they have more than one song, even pulling out an Undertones cover (“Teenage Kicks”) and a Buzzcocks cover (“Ever Fallen In Love?”). M.I.A.’s late-set impromptu stage bum rush was quickly dispersed, but not before she conveyed her disappointment (“No one brought any weed up here? Damn.”). Surprise of the day: James Hunter. Why isn’t he huge? Revelation of the day: After watching Josh Homme goth dance through the beginning of a song, Queens of the Stone Age could easily cross over genres.

How do you know that Peter, Bjorn & John are European? They know how to turn off the afterburners at a festival. Reports from their sets at SXSW 2007 pegged the Swedes' live show as "cute." Given that their most recent disc is all-too-adorable with melody, that wasn't hard to believe. Their performance here at ACL not more than an hour ago was anything but puppyish.

ACL: The Fire Updated
Thank goodness the brief water crisis was resolved. At approximately 2:30pm a large fire broke out in an employee-only area near the Wamu tent and the AT&T stage, where Pete Yorn was performing. The Austin Fire Department was called to the scene and quickly extinguished the fire, whose smoke clouds loomed large over the festival grounds. The fire started in a service recreational vehicle and quickly spread to two 18-wheelers. Four festival workers, described as middle-aged males in a brief press conference, were taken to Brackenridge Hospital. No festival patrons were injured, and emergency services coordinator Troy Officer sincerely thanked the ACL audience for their assistance.

ACL: It Has Begun
Taking the scenic route on the Town Lake trail to the ACL Friday morning, the theme from Chariots of Fire seemed to ease through the trees in slow motion. It provided a surreal opening soundtrack to this weekend's marathon festivities. No sooner had the gates opened did the shade promptly disappear, replaced with chairs filled by the elderly,staking their claim at the BMI songwriter's stage, where Sahara Smith surprised most early with her poised performance. Thus far the weather has cooperated, though problems have been reported with the main water line. Stay tuned.

ACL: Kaboom!
A local media outlet that will remain nameless wanted the Chronicle to comment on the differences between ACL and SXSW. Duh: a week and at least 1,000 bands.

More and more, though, ACL is picking up steam. Not so much in numbers, but in all the activity surrounding ACL. Last night, for instance, I knocked down a trio of Zilker Park performers some 12 hours before the first act - Sahara Smith, who was lovely - played her first note.

Crowded House, which taped an Austin City Limits episode, was at its droll, rollicking best. Paris' Gotan Project - two DJs and enough violins for the Austin Symphony - came off... Euro. As in, it probably goes over like gangbusters in a continental disco, but outdoors at Stubb's it was a snooze. Finally, Ryan Shaw at the Parish, a 26-year-old R&B act from Georgia, performed "Let It Be," everyone's least-favorite Beatles song. Enough said? Go see him anyway. Modern R&B acts kicking it old school are about as rare as STAX.

Then there was Charles Walker and the Dynamites this morning at the Four Seasons.

The 'Damaged' Cycle
Years ago, I lived in a house in Fort Lauderdale, Florida, a two-story remnant from the 1920s that had been converted into apartments, and then painted the most offensive shade of yellow, so that it looked like a block of cheese. It could be said my roommate and I were the most boring people living there. Behind us was the transsexual drug dealer who chased one of his/her underage houseboys down the street with a screwdriver late one night. Upstairs was a creepy older man with thick, grimy glasses who resembled an R. Crumb character and never wore a shirt. (He ended up being found dead in that apartment after I moved out.) And across the hall from him was a very large white trash family whose mother had a constant stream of mechanic boyfriends. One of her five sons was a teenage boy who, for about a month, listened to Black Flag’s Damaged pretty much on repeat.

Damaged was the first Black Flag album I heard as a teenager and I only picked up the cassette because the cover looked awesome. But now when I think of the album, the memories are of that house and my bedroom below his, the kick drum thumping through the ceiling, Henry Rollins’ vocals muffled but still unmistakably pissed. Somehow I came to appreciate the album more that way, reacquainting myself with the first anxiety-filled guitar line of “Rise Above” and the off-time urgency of “Gimmie Gimmie Gimmie.” Damaged always seemed unfuckwithable.

After Hippie Hour
After 15 years, Toni Price played her last Tuesday early evening gig at the Continental Club in April. Price has since moved to San Diego, but she left a huge hole in the SoCo venue’s schedule that left owner Steve Wertheimer scratching his head as how to fill it. What took its place is markedly different, yet retains enough of the vibe that made Hippie Hour special.

Dubbed Planet Casper, it’s anchored by Casper Rawls, longtime Price accompanist and Leroi Brother, and a rotating cast of musicians and songwriters that have included Price alums Scrappy Jud Newcomb, Warren Hood, and Rich Brotherton, as well as David Grissom, Earl P. Ball, and Steve Doerr. Set up as a writers-in-the round configuration, which allows for maximum participation, it’s a chance to hear a wide range of styles, original compositions, and surprising covers.

ACL: The Bloc Party
No one wants to go home at 10pm in Austin. As the annual ACL Festival continues to rise in national prominence, so have the number of “unofficial” aftershows. Here’s a quick rundown of this weekend’s more notable events.

The safest bet for the weekend is the two-venue, two-day throwdown at Mohawk and Club de Ville, sponsored by Dell Lounge and Hot Freaks! Art Brut, Grizzly Bear, Brazos, and Crazy Sexy Rainbow appear on Friday, followed by St. Vincent, Sparrow House, the Rosebuds, and Yellow Fever on Saturday. The guest list is apparently full at this time, but you can sign up for the waiting list here, or try slipping the door guy a ten-spot.

Me and Miss Jones
Call her Mrs. Partridge, call her Marian the librarian, call her Lulu Bains. Call her by the names of any of the characters she’s played in more than five decades on the stage and big and small screens and she’s got a story about it. From her Oscar-winning turn in 1960’s Elmer Gantry to pop culture icon in The Partridge Family to hot-blooded grandmother in 2006’s Grandma’s Boy, Shirley Jones is one of the coolest 73-year-olds still working.

She’s also very candid. When asked, “What were you doing before this phone call,” Jones doesn't hesitate to reply: “Having an argument.” That's followed by a laugh. I think she was relieved we didn’t talk much about The Partridge Family. “Don’t you get tired of talking about the series over and over?” I asked her. Another honest answer: “Yes, I do.”

Shirley Jones possesses one of the prettiest faces to have ever appeared on the big (or small) screen. Her natural, girl-next-door beauty was exquisitely designed with a velvety innocence; combined with her bell-clear soprano, no wonder the dream team of Rodgers & Hammerstein scooped her up and put her under contract for Carousel and Oklahoma! Being a squeaky-clean ingénue limited Jones, however, and when she heard about Elmer Gantry being made, she went after the part. Sort of.

“Burt Lancaster fought for me to get that role,” she recalled of how she landed the role of Lulu Bains. “He’d seen me do Playhouse 90 on television and thought I could do the part. Of course, I wanted it! I got to play against type.”