The Femi Kuti taping was an epiphany. Don't miss it.

Project Manager Allan Reagan contacted me midsummer about writing a few of the biographies for the designated musicians being honored. Local tech writer Dave Raum was already on board so I drafted by brother Stephen, who knows much, much more about local music than you’d guess, and my longtime friend John T. Davis, who feels as much like a classmate as a peer because we both started at the Austin Sun in the mid-Seventies. I wrote some of the biographical notes for the exhibit but ended up editing all 52 of them, which was a fantastic experience, an annotated trip through Austin’s musical history.

The evening itself was low-key, but it was a lovely chance to leisurely stroll the Wyndham’s upgraded grounds, admire the granite counters in the rooms, and lounge by the poolside casitas. I was tickled to be able to introduce Ray Wylie Hubbard to Blues Boy Hubbard. The latter Hubbard was honored that evening, as was W.C. Clark, and later they performed together and gave the audience a sweet taste of hard Texas blues.

I missed Dylan. And Lucinda. And all the cool young bands I am currently enamored of, like LCD Soundsystem (too quirky to resist), M.I.A. (I love her feistiness and musical vision), and … well, I may as well admit it … Arcade Fire (I can’t help it. Should I not mention I secretly want to see Fall Out Boy when they come? Shoot me now!). But since I despise outdoor concerts, this cool, air-conditioned reception with sublime Texas blues was my ticket for a great evening.

The Motel Life
Back in the halcyon days of alt.country, almost ten years ago now, Portland, Ore.’s Richmond Fontaine broke into the scene. They seemed too much like an Uncle Tupelo clone and I dismissed them after a SXSW show that was less than impressive. The resulting years have been kind to the quartet, their last couple of discs garnering them critical acclaim and a growing fan base internationally.

Willy Vlautin, Richmond Fontaine’s lead vocalist and songwriter, appears at BookPeople tonight at 7pm, and although he might perform a song or two, he’ll mainly be there to read from his new novel, The Motel Life (Harper Perennial). It’s his first and, while it contains some awkward moments, the story of two downtrodden twentysomething brothers living in Reno, Nev., dealing with an accidental hit-and-run that results in death, is one of the most gut-wrenching I’ve read.

Told in prose as bleak as the territory it covers, it’s soaked in beer and whiskey and snow and ice, with outrageous flights of fancy from one brother and understated napkin drawings from the other. Vlautin’s way with words has been compared to Steinbeck and Carver, and while he’s not in that sort of stratosphere yet, The Motel Life is an undeniably good first effort. Once you accustom yourself to the disasters its characters are facing, it ends.

Fittingly, Guillermo Arriaga, screenwriter for Babel and 21 Grams, bought the movie rights to the novel, and the translation of tragedy to the big screen is sure to follow in those films' layered, gritty style.

Richard Thompson, Warrior
Austin's lucky. One reason's that we're visited on a fairly regular basis by guitar god, master storyteller, and humorous human being Richard Thompson. He returns to the Texas Union Ballroom Saturday night just six months after his last appearance. The difference this time is that, for the first time in years, he'll be appearing with a band.

The occasion is latest disc Sweet Warrior (Shout! Factory), his first electric effort since 2003's The Old Kit Bag. It's another well-crafted collection of folk and Celtic influenced rock, one that explores the different types of war we can experience; the wars between many and the wars between individuals.

One of Thompson's most overtly political songs, "Dad's Gonna Kill Me," is told from the perspective of a soldier in Baghdad (the 'Dad'), wondering what might happen next. The other side of the coin is explored on the biting "Johnny's Far Away," a morality tale of a couple who cheat on each other yet maintain "the job of man and wife."

Thompson's career has spanned decades, so expect old and new. With longtime sideman Pete Zorn coloring with everything from saxophone to mandolin, it's sure to be another night of the joyous, intense, and sweet, if you're lucky.

Neeerrrrds!!!!
Apparently "nerdcore" is making a comeback. I mean, there was a NYT Style article about it last month, so you know it's true. Featured was Austin improv artist/ColdTowne Theater co-founder Chris Trew, aka Terp 2 It. Check out his video for "Don't Feel Like Learning" below. Gotta say it's not really "nerdcore." Um, 'prov-hop? He also performs Friday at Emo's with fellow weirdo Pleaseeasaur and Black Joe Lewis.

Attack of the Teenagers
I’m back from the skateboard store. I’ll leave shortly to go to Walmart to look at iPods or some generic version of it. Grand Theft Auto is hooked up to the Xbox on the plasma TV; I know because I tripped over the controllers left on the floor when Jackass II went into the DVD player. Good thing I can speak Myspace fluently: Teenagers have taken over my house.

The idea seemed good and felt noble – my brother Scott decided to relocate to Austin and we thought it would be better to get the boys settled in school at the beginning of the year instead of midway through. At last – my chance to put all that armchair parenting to good use! I thanked the TV gods I’d watched enough Cheaters on G4 to name-drop video game titles. Teens couldn’t possibly be as frightening as I’ve always heard they were. After all, I was one once.

Both are in school so party time at my house now occurs after the last one boards the school bus in the morning and before the first one gets home in the afternoon. Two Sundays ago, we watched the MTV VMAs while I explained frame-by-frame why Britney Spears’ career was crashing and burning before our eyes. Their response? “Dude, she’s hot.”

For fun this last weekend, we dropped them off near the Austin City Limits Festival on Saturday around 2pm. About 3:30pm, they called from Jack in the Box on Barton Springs. They were ready to come home. So far, so good.

And music? Dude, I am SO psyched about Avenged Sevenfold’s new CD that I can’t wait until the end of October when it comes out! That’s the day I leave on vacation.

ACL: Parting Shots
The first thing I see when I walk through the gates Sunday afternoon: An extremely sunburned man with a peace sign shaved into his back hair. I fumbled for my camera, and then he was gone, like Sasquatch. Highlights:

- Lucinda Williams covering the Doors' "Riders on the Storm."

- Has the dancing sign language lady always been at this fest?

- Ghostland Observatory had capes, lazers, and a very large, very enthusiastic crowd. "This reminds me of seeing the Dead in '72," said someone passing by.

See the photo gallery to the right for a few curious ACL fashion choices. 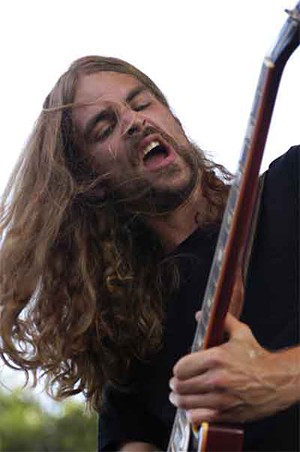 ACL: Rose Hill Drive
Bands you love whose albums you didn't - on the next Jerry Springer!

Boulder trio Rose Hill Drive left my jaw on the skeezy floor of Emo's front room the first time I saw them several years ago. They've been through Austin regularly since, but I haven't been able to catch up to them. Until today.

As they stormed through their 45-minute set on the Austin Ventures stage just now, steam rolling through their high watt blues-rock rampage like a cross between the Allman Brothers and Cream, I felt bad for my review of their LP studio debut in the Chronicle's ACL preview.

The self-titled disc comes off like a typical first time effort in many ways: a dearth of songs badly produced by a major label veteran. The threepiece rolled out a number of new cuts that buzzed louder and angrier than a rock-breached hornet's nest, though it was their set's penultimate song that rammed home the performance, the Beatles' "Birthday." That wasn't quite the highlight, however.

That honor belongs to that which I said/blogged was the only thing missing from Peter, Bjorn & John's ACL fist-pumping highlight on Friday: a smashed instrument. Bass-playing Sproul brother Jacob, who'd been having equipment problems all show long, promised to destroy his instrument at the end of set, and did just that, bashing it into the stage two or three times before handing the headless guitar to a couple of kids leaning against the stage barricade when he was done. There's an ACL souvenir for you.

Rose Hill Drive's next album may or may not fall prey to the dreaded sophomore slump, but you can be damn sure that I'll get my hands on it quicker than you can say "Whipping Post" and debut it on my home stereo on 11. If it's not as good as the band's live set, then my stereo better quiver and quake lest it end up like Jacob Sproul's poor dead bass...

ACL: Life Lessons With Ziggy
“We’ve got to take care of the Earth, kids,” Ziggy Marley prefaced his three-song, all-encompassing history lesson at the Austin Kiddie Limits stage. Bookended with the title tracks of his two latest, 2003’s Dragonfly, an appropriate theme for this weekend’s festivities, and 2006’s Love Is My Religion, Marley’s 12-minute set explored universal truths through timeless reggae classics. “Kids, in case you don’t know, my father’s name is Bob Marley,” Ziggy explained before a meditative version of “Lively Up Yourself.” “All we need is love,” he later concluded. Indeed. Class dismissed.