Even with weakened chops, the HoFers enjoy each other's company 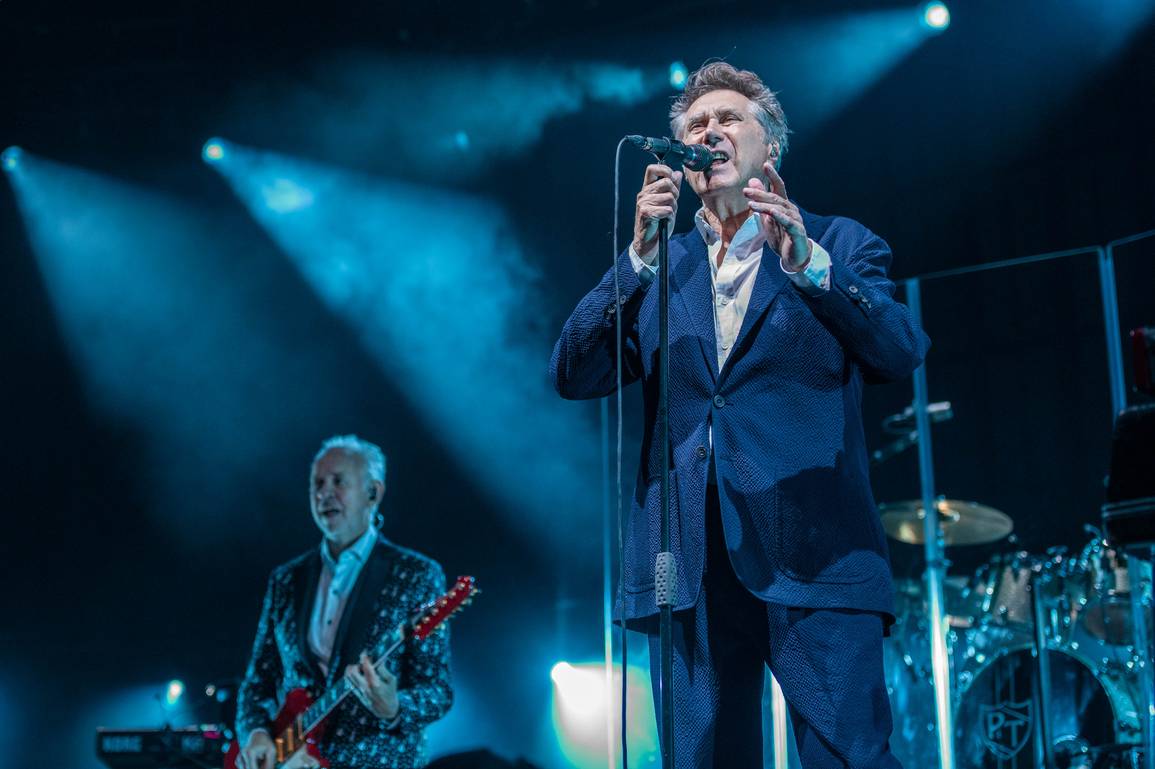 For aged war beasts of the album-rock era, marshalling the troops for milestone-birthday arena tours involves working through decades of material and hundreds of tracks, including songs that were fully used up and emptied out back when the Queen had no grandchildren. It can be a lot of work.

Roxy Music is a famous, remarkably influential (creating, somewhat by accident, the musical and aesthetic genre that would later evolve into New Wave), and now venerable Hall of Fame band. They also have a reputation among classic-rock scholars for being self-satisfied, louche, and kinda lazy. Frontman Bryan Ferry turned these attributes into his memorable stage persona as an foppish and witty ladies’ man long after he was too old for that shit, which was when he was only half as old as he is now. In a decade of active duty, they broke up for years at a time and only managed to make eight studio albums, the most recent (and in the US the most popular, Avalon) in 1982; the band’s complete Spotify playlist (including live tracks) lasts less than seven hours.

So the just-bigger-than-modest crowd that spelunked into the enchanted caverns of the Moody Center on Wednesday, Sept. 21, were bound to get not only the hits but some deep tracks, even if most of the 20-song set was firmly anchored in the smooth smoky soul depths of Roxy’s early-80s commercial heyday, an easy and comfortable groove to lock into as Ferry, guitarist Phil Manzanera, and saxophonist Andy Mackay enjoyed advanced middle age with their Texas friends. Intermittent fourth member Paul Thompson returned on drums, along with another drummer, two keyboardists, guitar and bass support, a young woman on sax who looks like she could be Mackay’s daughter, and three side singers positioned right next to Ferry.

The kickoff number “Re-make/Re-model,” a tune most in attendance surely did not know, and one with semi-nonsensical lyrics that they surely could not follow, earned its pimp spot as Side 1/Track 1 of the first self-titled Roxy Music album in 1972, back when the then-sextet included “technical advisor” Brian Eno. Of course they opened with their first song! (This was not mentioned on stage.) How clever! How obnoxious! What eccentric little English eggheads these are! They must be very impressed with themselves. Yes, they are, and so are their eccentric egghead fanboys (guilty as charged).

Ferry, Mackay, and Manzanera are pretty spry old-timers, clearly enjoy each other’s company and found each others’ performances entertaining, and really, what more can we ask from our distinguished rock veterans? Of the 20 songs performed, only eight were famous enough to have made it to the Street Life: 20 Great Hits package from 2006 - “Do the Strand,” “Love is the Drug,” and the full stretch of turn-of-the-Eighties hits from “Dance Away” to “Avalon,” (including “Jealous Guy,” the one cover in Wednesday’s set, a hit for Roxy in 1981 after John Lennon's murder). So it was nice to hear early-album deep cuts like “The Bogus Man” and “If There Was Something,” which must have been performed live rarely if at all since their creation five decades ago.

Spending so much of the set length on obscure album tracks did have the salutary effect of making it more difficult to notice onstage flubs and miscues that would have been hard to indulgently ignore on more familiar fare. While Manzanera and Mackay still have chops, they clearly don’t have the stamina to play every note they played on the original recordings, particularly from the band’s mid-70s technically challenging artistic peak, although their supporting side players did much to close the gaps. The situation was more dire for Ferry, who has about a five-note range at this point (he sounds not unlike Willie Nelson at times), and who artfully but not always successfully tried to blend his vocals with his side singers (“Dance Away” required some on-the-fly key adjustments). But he hung in there! Assuming this is the last time Roxy Music plays Austin, they left pleasant sounds and vibes behind to remember them by.